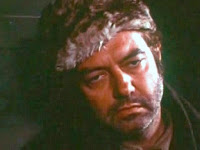 Born Francisco Eduardo Eyres Martínez on April 3, 1922 in Rosario, Argentina. We know him under his stage name Alberto Dalbes. He appeared as a character and supporting actor in over 70 films and television appearances. Starting his career in Argentina he then moved to Spain where he appeared in all genres of film including Horror, Adventure and Crime films from 1943 until 1980. Among these were four Euro-westerns, “Billy the Kid” (1963), “100 Rifles” (1969), “Cut-Throats Nine” (1970) and “Pancho Villa” (1972). Dalbes never became a star but was always a reliable supporting player who made his mark in European film history. He died of a heart attack on September 14, 1983 in Madrid, Spain. He was only 61. Today we remember Alberto Dalbes on what would have been his 90th birthday.
Posted by Tom B. at 6:11 AM