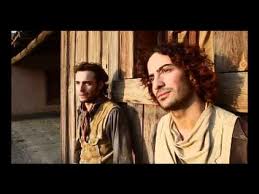 Pour quelques westerns plus (For a Few More Westerns) (French documentary on stuntmen of Fort Bravo)
Pour quelques westerns plus – French title
For a Few More Westerns – English title
A 2011 French TV production [Bonne Pioche TV, France 3 (Paris)]
Producers: Vincent Kelner, Nicolas Cennac
Directors : Vincent Kelner, Nicolas Cennac
Running time 13 minutes
They are called Jesus, Alberto, Ricardo and Alejandro. They are stuntmen and work in the last working western studio and set in the western desert of Tabernas, near Almeria. Over 350 films were shot here in this magnificent landscape reminiscent of Arizona. For the past 50 to 70 years, all the top stars have passed through here: Eastwood, Harrison Ford and many others ... Then came the decline.
These memories are still shining in the eyes of Jesus. His life is the West, film and action. At age 6, he was listed in "For a Few Dollars More" and since he has not taken off his outfit cowboy. Every day he dies and rises before the tourists ... which replaced the stars. In this desert, the dream seems never to have ceased to shine
YouTube link: http://www.firstpost.com/topic/person/pimp-c-pour-quelques-westerns-de-plus-documental-frances-especia-video-oU2wpcmEt8I-21942-1.html
Posted by Tom B. at 11:54 AM