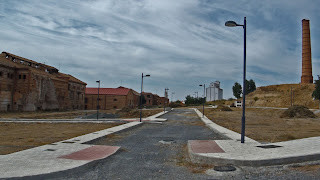 Continuing with locations for “Duck You Sucker”. After the explosion at the bridge Juan finds his family and the other revolutionaries slaughtered in the caves they’ve taken refuge in. This scene was filmed in Italy and will be covered with the other scenes not shot in Spain at the end of the locations filmed in Spain. We then see a crane shot of people in pits being shot by Mexican soldiers. This was filmed at a sugar beet processing plant outside of Gaudix. These pits were still there until about a year or so ago when they filled the pits converting them into streets and light posts and sidewalks were added covering the area. Thanks to Ray Watts for permission to use the picture he took in 2011 for the comparison shot. 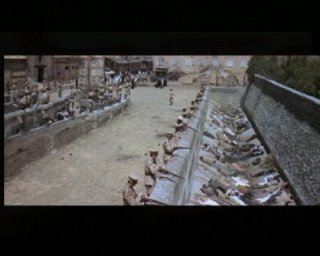