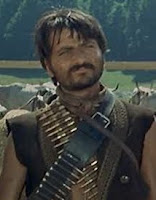 Omero Capanna was born on March 4, 1942 in Rome, Italy. Following in the footsteps of his father Othello who was a stunt performer in numerous films and as an expert in the use of horses made him one of the best in the business. He’s remembered for his participation as an acrobat in “Ben Hur” (1959), where he played one of the charioteers involved in the mythical chariot race. In this regard he performed a heroic act by having saved several extras, whom would have been killed or injured by some runaway horses during the filming. Omero, began to follow his father around on film sets, learning his craft and how films were made. He began as a wrangler and held horses between scenes. His first credited film was “La regina dei Tartari” (The Huns) (1960). Thus began a career with over 400 appearances. He’s credited with appearing in 25 westerns but actually appeared in over 65 including stunt work. In the early 2000’s he contracted a deadly disease and died on October 11, 2003 in Rome at the age of 61. Today we remember one of the great Italian stuntmen, Omero Capanna, on what would have been his 70th birthday.
Posted by Tom B. at 6:16 AM