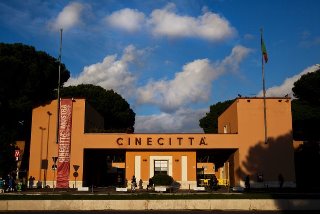 On Its 75th Anniversary, Italy's Cinecittà Studio Attempts to Recapture Its Former Glory

Alessandro De Angelis is the fourth generation of his family to make props in the sculpture shop at Rome's legendary Cinecittà movie studio. His 16-year-old daughter will follow him into the business — he hopes. The De Angelis name is synonymous with quality throughout the film industry, yet he fears that fierce international competition for Hollywood production money, the slow decline of the Italian movie industry, and advances in technology will eventually put artisans like him out of business. Already, the family can no longer depend on movies alone to stay afloat — De Angelis compensates his income by making copies of statues for museums. "Almost nobody comes knocking on our door to learn the trade anymore," he says. De Angelis' struggles mirror that of Cinecittà, which as it celebrates its 75th anniversary on Saturday is a shell of its former glamorous self. Benito Mussolini built Europe's biggest movie studio in the 1930s in pursuit of a Fascist celluloid propaganda machine. It took 457 days to complete — far less time than fixing many potholes in 21st century Rome — and in the six years after its April 28, 1937, inauguration under the slogan, "Il cinema e l'arma piu forte" ("Cinema is the strongest weapon"), it produced some 300 films. The studio's heyday came during the 1950s and '60s Italian economic boom when Federico Fellini and Marcello Mastroianni made such masterpieces as La Dolce Vita and 8½. Tax incentives also lured Hollywood producers to Cinecittà to film sword-and-sandal epics like Ben Hur and the romantic treacle Roman Holiday.

Today's Italian actors and directors say that's all ancient history. Italy's film output began to decline in the 1980s before going into a free fall in the '90s, in part, those in the industry believe, due to the monopolization of production by former Prime Minister Silvio Berlusconi's media empire, the Ministry of Culture and state broadcaster RAI. To make matters worse, foreign productions also started bypassing Cinecittà's sound stages for more affordable options in Eastern Europe. In 1997, Cinecittà was on the verge of bankruptcy, saved only when the government sold the property to private investors, including the owner of the luxury shoe company Tod's, Diego Della Valle. Hundreds of movies were once made annually at Cinecittà, but last year, just eight Italian films and six television series were shot there.

"Cinecittà should be named Telecitta. It was mythical. Now they shoot TV shows," says Laura Morante, one of Italy's most admired actresses. Morante, who has nearly 90 movies and television shows to her credit, believes Italian politicians have left film and "culture in general" by the wayside in recent years, a major reason for the studio's downfall. For instance, she struggled for more than seven years to find Italian investors for her directorial debut, a romantic comedy called Ciliegine (Little Cherries), but in the end, was forced to make the film abroad. "Nobody called me back. I think my project was stuck in bureaucracy. In the meanwhile, the French asked me to do it," she says. She encourages frustrated talent to follow her lead: "Go abroad. It's very difficult here."

Evidence of cultural abandonment by the Italian government isn't too hard to find. In recent years, the government has dramatically slashed funding for the arts as it's tried to reign in the world's fourth-largest debt — much to the anger of directors, actors, artists, and the public. Sandro Bondi, the former culture minister who in 2010 famously accused Venice Film Festival jury president Quentin Tarantino of being the embodiment "of an elitist, relativist and snobbish culture," was outraged last year when the government cut funding for Cinecittà's state-owned archive from 29 million euros to 7.5 million euros, threatening the future of the facility. "The funding is absolutely insufficient," he declared at the time. The Casoria Contemporary Art Museum in Naples, meanwhile, began staging a rather dramatic protest to the cuts this month by burning its works. The museum, which is not dependent on public funding, will burn three paintings a week until its entire collection is in ashes — "or the authorities stop us," says Antonio Manfredi, the museum's art director. "For a country that should be the avant-garde of the arts, the attention Italy gives to culture is absolutely inadequate," he says.

Unsurprisingly, pessimism about the future of Italian cinema is rife. Enzo Monteleone, who wrote the screenplay for the film Mediterraneo, winner of the Best Foreign Language Film at the Oscars in 1991, says the country still produces about "20 good films" each year, but he believes the overall state of the industry is "tragic." He complains that the domination of the film industry by the tripartite of Berlusconi's media empire, state broadcaster Rai and the Ministry of Culture has prevented independent filmmakers from securing funding and young filmmakers from developing their talents. The government needs to follow France's lead and take a serious interest in financing movies, he says. "In Europe, you can't depend only on the private sector. Here, cinema is considered an art, not just entertainment."

There are some bright spots on the horizon, however. Italians are still among the best in the world at set design and construction, which is one reason HBO decided to film its Rome series at Cinecittà in the mid-2000s. Marco Valerio Pugini, part-owner of Panorama Films, which helped produce Rome, says there's also been an upside to the economic crisis — the Italian government last year decided to make permanent a three-year tax break for foreign and domestic companies that shoot films in Italy. Pugini says such incentives will hopefully staunch the flow of Hollywood and other foreign productions to cheaper locales in Eastern Europe. "We have the same costs as five or 10 years ago. But costs are slowly rising in the east. There'll always be someplace cheaper but we have a large pool of talent," he says.

Cinecittà is also trying to revive interest in the studio by building a 500-million-euro theme park called Cinecittà World on a 370-hectare property it owns on the Mediterranean coast. The park, which will partly open at the end of 2013, is being designed by three-time Oscar-winning art director Dante Ferretti and will include attractions based on Hollywood mega-productions made at Cinecittà, like Ben Hur. The studio is also mulling a 90-million-euro investment to build a hotel, offices, and a new sound stage on empty parts of its lot in Rome. Cinecittà's general manager, Giuseppe Basso, believes the studio is poised for a comeback, fueled by Italian talent, the allure of filming in Rome, and the new services offered by the studio. At the very least, he says, the studio's dark days are behind it. "If you can survive in this industry for 75 years, that's reason to celebrate."