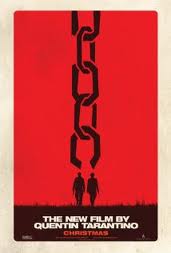 Not an outfit to hide Quentin Tarantino’s lights under a bushel, the Weinstein Company has started to build publicity for his Spaghetti Western “Django Unchained,” which isn’t a Western at all but a Southern slavery revenge saga.

Late last week, the Weinsteins, who will open the film on Christmas Day, put out two scarlet-and-black posters (clearly inspired by the minimalistic designs of Saul Bass), followed by a synopsis jointly issued by Sony Pictures, which will release the film internationally. The synopsis is purportedly intended to put Tarantino bloggers on the right track. It reads thus:

Set in the South two years before the Civil War, ‘Django Unchained’ stars Academy award-winner Jamie Foxx as Django, a slave whose brutal history with his former owners lands him face-to-face with German-born bounty hunter Dr. King Schultz (Academy award-winner Christoph Waltz). Schultz is on the trail of the murderous Brittle brothers, and only Django can lead him to his bounty. The unorthodox Schultz acquires Django with a promise to free him upon the capture of the Brittles – dead or alive.

Success leads Schultz to free Django, though the two men choose not to go their separate ways. Instead, Schultz seeks out the South's most wanted criminals with Django by his side. Honing vital hunting skills, Django remains focused on one goal: finding and rescuing Broomhilda (Kerry Washington), the wife he lost to the slave trade long ago.

Django and Schultz's search ultimately leads them to Calvin Candie (Academy award-nominee Leonardo DiCaprio), the proprietor of "Candyland," an infamous plantation where slaves are groomed by trainer Ace Woody (Kurt Russell) to battle each other for sport. Exploring the compound under false pretenses, Django and Schultz arouse the suspicion of Stephen (Academy award-nominee Samuel L. Jackson), Candie's trusted house slave. Their moves are marked, and a treacherous organization closes in on them. If Django and Schultz are to escape with Broomhilda, they must choose between independence and solidarity, between sacrifice and survival …" 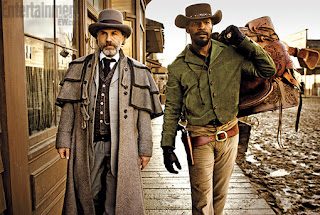 The main influences on “Django Unchained” are Sergio Corbucci’s violent 1966 Spaghetti Western “Django,” starring Franco Nero as an ex- Union soldier caught in a war between a Mexican gang and a white racist gang, and Gualtiero Jacopetti and Franco Prosperi’s faux 1971 documentary “Farewell Uncle Tom” (“Addio Zio Tom”); partially censored in America, the latter was based on documents about racism in the antebellum South.

Just as Tarantino borrowed from the likes of “The Dirty Dozen” (1967) and the Italian war film “Inglorious Bastards” (1978) when examining the Holocaust in “Inglourious Basterds” (2009), he will primarily filter his depiction of the evil of slavery through Spaghetti Westerns and, perhaps, samurai films.

In 2007, it’s worth noting, he played Ringo in Takashi Miike’s 2007 samurai Western “Sukiyaki Western Django,” similarly influenced by the Corbucci film as well as by Sergio Leone’s “Dollars Trilogy” (1964-66), of which “A Fistful of Dollars” was a remake of Akira Kurosawa’s “Yojimbo” (1961). “Django” meanwhile took its opening shot from “Yojimbo.” 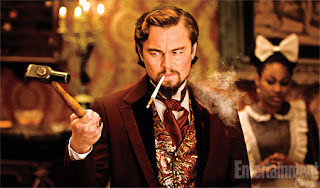