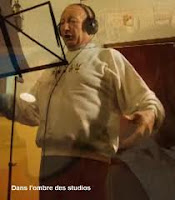 French singer and voice actor Jean Stout died April 10th in France. Born in Gironde, France on April 13, 1933 he moved to Paris in the 1950s, where his superb bass voice worked wonders. The years 1960-19070 were "big times" for French music. The musicians and singers had a lot of work, on studio recordings, television shows, and tours. Quickly replacing Peter Marret, Jean Stout becomes the only bass during the golden years (with the exception of Jose Germain, rather bass-baritone). In studio session choirs then being mainly led by Janine De Waleyne and himself, John Stout "launches" a whole new generation of singers (Olivier Constantin, Michel Barouille, Claude Lombard ...) and works with the greatest singers. Detecting in him a taste for comedy, Jean-Luc Azoulay hired him to play the character of Henry Golo (bass) in performances of Dorothy. We can see him in the video “Dorothy in the Land of Songs”. He is also the genius behind the song ‘Shang Shang Lang’ by Sylvie Vartan. In the mid-'60s, John Stout becomes involved in dubbing Disney as a voiceover for documentaries. Encouraged by Jean Cussac, he passed the auditions for the singing voice of Baloo in “The Jungle Book” (1968), where he succeeds. He is also the beautiful and deep singing voice of Shere Kahn at the end of the quartet of vultures. Since “The Jungle Book”, Jean Stout participated as a singer (and regular soloist) in almost all of the Disney soundtracks until the early 2000s (His last dubbing was in Snow White and the Seven Dwarfs). Jean is the singing voice of Little John in “Robin Hood” (1973), Owl, Piglet and Eeyore in “Winnie the Pooh” series (‘80s), and the spoken and singing voice of Tony the cook in the Italian second doubling “Lady and the Tramp” (1989). Film dubbing requiring low vocals were getting scarcer,  so Jean Stout retired. Jean was heard singing ‘The Daltons’ in Lucky Luke: Daisy Town” (1971) and in the barber shop quartet backing Eric Christy singing “The Ballad of the Daltons” in 1978’s “Lucky Luke: The Ballad of the Daltons.