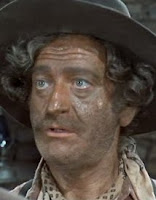 Steffen Zacharias was born on April 11, 1927 in Germany. Although born in Germany, he and his parents were full-blooded Greek and Greek Orthodox. Stefan came to the U.S.A. and began studying for the stage. He became a stage director in New York before turning to film acting with an appearance in the 1964 TV series “The Reporter”. He then moved to Italy and made his first film appearance in 1968’s “Catch as Catch Can” directed by Franco Indovina. He would go on to appear in 48 films and TV series. Among them were eight Euro-westerns, most with Terence Hill, including “Ace High” (1967), “The Call Me Trinity” (1970) and “Man of the East” (1972). Zacharias returned to the U.S. in the early’80s and continued to act until his death in North Hollywood, California on June 6, 1989 from cancer. Today we remember Steffen Zacharias on what would have been his 85th birthday.
Posted by Tom B. at 6:08 AM