Here are some behind the scenes of “A Fistful of Dollars”. A crewmember setting off a smoke bomb which is blown in the direction of Ramon and his men signaling the arrival of ‘The Man With No Name’ the avenging angel. A second shot preparing for the shot where No Name tells Ramon to, “Shoot for the heart. Shoot for the heart Ramon or you’ll never stop me.” 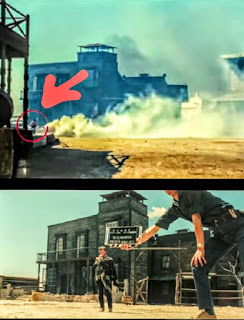 Once Upon a Time in Spaghetti Westerns Podcast #28 “Hermanos Terron”

Join Jay Jennings and myself today at high noon PST for the “Once Upon a Time in Spaghetti Westerns” with podcast #28 “Hermanos Terron”. We’ll discuss Jose Terron and his brothers who were stunt riders and character actors in some of the genre’s best-known films. 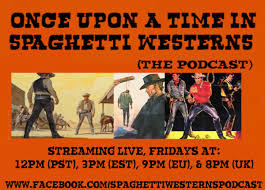 His Problem In Those Big Texan Hats [archived newspaper article]

His Problem In Those Big Texan Hats

Yugoslav actor Ivan Scratuglia, star of a new television series about Sicilian bandits, is learning how to wear a Texan ten-gallon hat for his latest role.

The handsome 27-year-old Scratuglia, who has appeared in a number of important Italian movies, has been cast as one of Joseph Cotton’s gun-slinging sons in Joseph E. Levine’s “The Tramplers” now filming outside of Rome.

“Guns and horses are easy after my bandit roles”, he explains, “but getting used to those Texas hats – oh boy”.

In “The Tramplers” Scratuglia makes his first appearance in a Western although he has turned down offers to appear in other smaller Italian cowboy pictures, “They weren’t serious films”, he states.

Among the young actors “serious” movies are Luchino Visconti’s “The Leopard” Ugo Gregoretti’s “Nine Angels” and Edward Dmytryk’s “The Saint”. He starred as the hero of one of the episodes of “Heroes of Yesterday, Today and Tomorrow” and was assistant director to Gregoretti on “The Beautiful Family”. As soon as shooting is completed on “The Tramplers” he will head back to Yugoslavia to portray a partisan leader in the Geraldine Chaplin film ”Let’s Go to the City”.

Scratuglia came to Italy originally in 1957 to prepare himself for an acting career. He studied at Alessandro Fersen’s Actor Studio in Rome for two years and toured with Fersen’s company. After that he went to Rome’s noted Experimental Cinema Center to learn movie techniques. “Joseph Cotton was one of my heroes at the time”, he says “so I felt really pleased to be picked to work with him in “The Tramplers”.