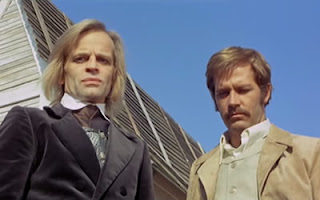 During a Wild East interview on the Volume 50 DVD. Harrison says he enjoyed working with Klaus Kinski, but recalls how he would intentionally cause problems or uproar on the set, in some cases so he could film his scenes early in the day, then leave.
Posted by Tom B. at 4:09 PM No comments:

Italian stage, film, TV actress Laura Troschel died in Rome on September 29th after a long illness. Of German decent, Troschel was born in Varese, Italy on November 3, 1944.She made her film debut in 1968’s "Il sesso degli angeli" (The Sex of Angels), by Ugo Liberatore. Later, she appeared in some movies as Constanza Spada, until she became the wife of comedian Pippo Franco and went back to using her real name. Between the 1970s and 1980s she participated with her husband in a number of comedy films. She was also active in television, in which hosted some popular shows with Franco and has taken part as an actress in several miniseries. Although for the last three decades she was known as a theater actress she will be best remembered as a film actress in such Italian films  “The Blind Fly” (1966) “Four Flies on Grey Velvet” (1971) and “Tutti a squola” (1979). Her only Euro-western was 1971’s “Vendetta at Dawn” starring George Eastman and Ty Hardin where she played the role of Lory Baxter Benson billed as Costanza Spada.
Posted by Tom B. at 7:06 AM No comments:

Who Are Those Gals? Barbara Brylska

Barbara Brylska was born in Skotniki, Poland on June 5, 1941. Her early childhood was marked by the trauma of survival under the Nazi occupation of Poland during the Second World War. At the age of 15, she was cast in the film “Kalosze szczescia”. After this role, she took acting lessons in a theater school and became a student at the National Film School in Łódź. In 1967 she completed her acting education at the Warsaw School of Theatre, Film and Television.

Brylska's first major role was in the film “Ich dzień powszedni” (1963). In 1966 she played the Phoenician priestess Kama in the feature film “Pharaoh”, based on the novel by Bolesław Prus.

Apart from Polish-directed movies, she has also played in films directed by Soviet, Bulgarian and Czechoslovakian directors.

For her role as Nadya in the 1975 film “Irony of Fate”, directed by Eldar Ryazanov, she received a Soviet state award. Her acceptance of this award created controversy in her home country. Nonetheless she became a popular actress in the Soviet Union. She would later claim that her success caused jealousy in the Polish film community and led it to ignore her work.

In 1977 she was a member of the jury at the 10th Moscow International Film Festival.

After her daughter’s death and a burglary in her apartment in Warsaw, Brylska suffered from a nervous breakdown, but she continued acting.

Since 2000 Brylska has been acting in stage plays, primarily in Russia. She reprised the role of the aged Nadya in the 2007 “Irony of Fate: The Sequel”.

Short television documentary on the Spaghetti western phenomenon.
Posted by Tom B. at 5:38 AM No comments: