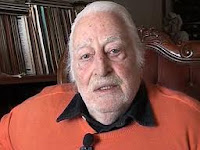 Carlo Croccolo was born on April 9, 1927 in Naples, Italy. In his long film career he’s appeared in over 115 films in America and Italy and has worked with many directors including: De Sica, Dmytryk, Asquith, Lester, and Sherman Sherling. Croccolo has dubbed the voices of Oliver Hardy into Italian and Toto, into English and in “Operation San Gennaro”, Croccolo dubbed the voices for ALL players! On television, he’s participated in numerous programs and series and starred in the TV show "The Borsacchiotto" (1978). As for the theater, after his debut he’s gone from one success to another and then moved to New York in 1959-60 for the opportunity to collaborate with Julien Beck's Living Theatre. Back in Italy he has played in numerous shows and co-directed a theater in Rome. In the past few years he’s worked in "La grande magia” directed by Giorgio Strehler, “Rinaldo in campo” and “Aggiungi un posto a tavola” directed by P.Garinei and “Liolà” directed by Maurizio Scaparro. Carlo appeared and sometimes directed and wrote the screenplays for three Euro-westerns; “The Sheriff was a Lady” (1964), “Gunmen of 100 Crosses” and “Black Killer” (both 1971). Carlo also used the alias Charlie Foster and Lucky Moore. Today we celebrate Carlo Croccolo’s 85th birthday.
Posted by Tom B. at 6:01 AM