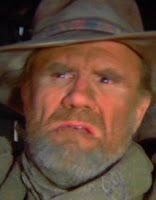 Robert Golden Armstrong, Jr. was born on April 7, 1917 in Birmingham, Alabama. His mother had hopes that he would pursue a career as a pastor, but R.G. did not have the calling to pursue such a career. After high school he attended the University of North Carolina and earned a degree in English. While in college he participated in a number of theater productions. He went on to receive a Master’s Degree and then moved to New York City and joined the Actor’s Studio. After graduation he performed in several Broadway plays such as “A Cat on a Hot Tin Roof” and “Garden of Eaden”(1954). Soon after he moved to Hollywood and began appearing on television series, mostly westerns such as “Have Gun – Will Travel”, “The Rifleman”, “Maverick” and “Wagon Train”. This led to appearances in films such as “Ride the High Country” (1962), “Major Dundee”, “Eldorado” (1965), “The Ballad of Cable Hogue” (1970), and “Pat Garrett and Billy the Kid” (1973). R.G. appeared in only one Euro-western “My Name is Nobody” (1973) in the role of Honest John, where he was billed as R.K. Armstrong. Even though most of his on-screen characters that he portrayed were strong willed and violent, off-screen he was a very caring and gentle man. After a final appearance on the TV film “Purgatory” in 1999, R.G. retired as he was afflicted with almost total blindness. Today we celebrate R.G. Armstrong’s 95th birthday.
Posted by Tom B. at 6:16 AM