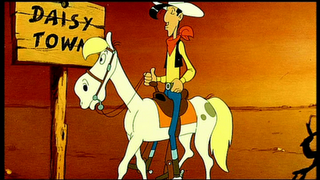 Lucky Luke rides into the city of Daisy Town, once a peaceful community but now under constant siege by criminal elements. After running the undesirables out of town, Luke becomes the new sheriff. He's then faced with his biggest challenge in the form of the Dalton Gang (recurring villains in the comic and consisting of brothers Joe, William, Jack and Averell). The Daltons convince a neighboring Native American tribe to declare war on Daisy Town (by telling them if the settlement were allowed to develop they would eventually be forced off their own land, which of course turned out to be completely correct) but Luke is able to quickly negotiate a truce, foiling the Dalton's plans.
YouTube link: http://www.youtube.com/watch?v=ke6JNVK3AWQ
Posted by Tom B. at 5:51 AM