Sergio Leone is back on the 30th anniversary of his death

On the occasion of the thirtieth anniversary of the death of Sergio Leone (April 30th 1989), VIGGO presents a special tribute with a double show in theaters from April 29th to May 7th with the restored version of “A Fistful of Dollars” and the documentary “Sergio Leone: Cinema, Cinema” by Carles Prats and Manel Mayol.

It starts in Torino at the Massimo Multiplex from April 29th and continues in Milan (from April 30th at Cinema Beltrade) and Florence (from May 7th at the Multisala Principe).

The unforgettable masterpiece “A Fistful of Dollars” (1964) will be presented in the 4K version restored by Ripley’s Films and by the National Film Library of CSC in collaboration with Unidis Jolly Film and Sky Cinema. While it retraces the life of the great director, the documentary “Sergio Leone: Cinema, Cinema (2001) by Carles Prats and Manel Mayol will accompany the viewer through unpublished testimonies of friends and collaborators of the director. Tonino Delli Colli, Sergio Donati, Ennio Morricone, Dario Argento, Fernando Di Leo, Florestano Vancini up to Christopher Frayling and Luca Verdone, along with many other names from our cinema and beyond.

Story: The documentary traces the life of the great director, through unpublished testimonies of friends and collaborators of the director

Glenn Danzig, a busy man: will direct a film

In the last few days, the renowned singer has given free rein to another of his projects: the cinema, since he is writing and directing a spaghetti western movie, starring vampires.

This plan by Glenn Danzig offers something different from the other initiative of the seventh art in which he has concentrated, based on his contributions to the Verotik comics. Several details are still unknown.

If you think that is the only thing that Glenn Danzig has been involved with, you are wrong. In a post he announced that his postponed album with versions of Elvis Presley songs will be released later this year, in addition to his commitments with the returned Misfits: there is a concert scheduled for the end of April, in addition to another one in June, in a large stadium in Los Angeles.

"The long-awaited" Danzig sings Elvis "has been scheduled for an autumn release. We are going to publish the cover and the tracks in the coming weeks. Mr. Danzig has also put the finishing touches on the script for his next film that will be a vampire spaghetti-Western and Danzig will direct. The casting will begin shortly ... busy year for the man !! ", you can be read more on the official Facebook page of the artist.

A lost scene from "Once Upon a Time in the West"

One of the most famous deleted scenes from Sergio Leone's "Once Upon a Time in the West" is the beating of Harmonica (Charles Bronson). For years, stills have appeared from the scene but the visual part of the narrative was difficult to piece together.

With the release of Christopher Frayling's new "Once Upon a Time in the West/Shooting a Masterpiece" book, more photos and information about the beating scene have come to light. I have tried to assemble everything into this one post for educational purposes, however the majority of the text and photos here are Christopher Frayling's.

Shot about five weeks into production (May 7, 1968), the beating scene was cut before the film even started editing.

Well into his schedule, Leone realized the pace he had established (up until that point) meant the first cut would likely be 4 hours long. Paramount had already contractually set a maximum length of 150 minutes.

A panicked Leone faked an illness to give himself a few days to come up with a solution and called in Sergio Donati (Italian Script) and Mickey Knox (English script) to rewrite as he continued to shoot.

The information/exposition in this scene was rewritten into later scenes and the beating footage was likely never even assembled. Harmonica does retain the scars from the beating for the early part of the finished film.

This summary below is of the original Italian script by Christopher Frayling in "Spaghetti Westerns" (revised version 1998). It's clear that certain things were changed from script to shooting, for instance Harmonica's height and some of the blocking. It's also likely much of Harmonica's dialog would have been trimmed, the character in the finished film is not nearly as talkative.

As far as I can tell, I have collected here all the known stills of the scene, if anyone has anything else, I'll happily add it.
Interior. Chinese Laundry. Night.
Wobbles, the proprietor, is busily walking around the mangles, steam-pressers, baskets of washing, and groups of Chinese workers who are sleeping on the floor.

The Chinese workers watch, ‘with half-opened eyes, timid and frightened’.

Wobbles: "You must be tired. Certainly, after a long journey like that. My home is yours. We can talk later, more calmly . . ." (As always, Wobbles is ‘strained and nervous’.)

Harmonica says nothing, but indicates that he wants to know the way to a bedroom. Wobbles shows him. As Harmonica passes an oil-lamp, he picks it up, lifts it above his head, and ‘spinning round with it, watches the startled faces of the Chinese disappear, like magic, behind laundry baskets’.

The next scene shows Harmonica settling down for the night, in an upstairs bedroom; he is lying on a bed which is too short for him, fully-clothed, his gun (‘that pistol which he never seems to know what to do with’) by his side.

We can dimly see the shape of a ‘voluptuous, still young, Mexican woman’: "My husband sent me up, to see if you needed something . . ."

Harmonics smiles: "He could have sent one of the Chinese women."

The woman shakes her head slowly: “He was afraid you wouldn’t like one . . . he could have offended you . . . the worm! Now he’s mad with jealousy. He's at the bottom of the stairs, suffering like a dog." (It is clear that she is talking about Wobbles.)

Harmonica looks at her, smiling. As she unties the strings of her bodice, and approaches the bed, Harmonica wiggles his toes: "Massage my feet." ‘With a sigh of acceptance, the woman obeys.’ 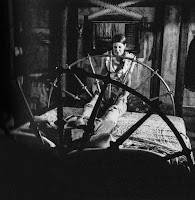 With ‘gentle and expert hands‘, the girl massages Harmonica’s feet, and he begins to relax: ‘it really seems as if he is about to go to sleep. ’

Suddenly, with great care, ‘two big hairy hands, with short cut nails, come into view, and take over from the girl’s soft and delicate hands’.

The girl’s hands ‘seem to be pushed away with force’.

The large hands, ‘trying to be delicate’ continue the massage: Harmonica does not stir, but his right hand gradually moves, ‘as if in sleep’, towards his gun. ‘Another hand enters from above, and brings down the lighted tip of a cigar onto the back of Harmonica’s hand’. 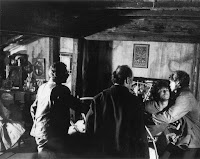 Harmonica jumps up, to be greeted with the sight of three strange men in his bedroom. The man with the cigar grabs hold of Harmonica’s shoulders, a second man raises his knee and crashes it into Harmonica’s face, while a third man kicks Harmonica out of the bedroom.

Harmonica is rolled down the stairs and into the street: he is then forced into the stables.

His face ends up near a pair of boots: a man is sitting on a ‘heap of hay’, and Harmonica tries to get him into focus. We see the blurred image of “something shiny, like a luminous sun’. Harmonica blinks, unable to believe his eyes. The image is that of a sheriff’s star, and the three men are in fact deputies. 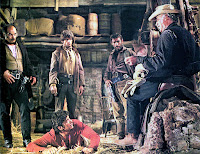 The Sheriff (Keenan Wynn) signals his three deputies to leave: "No," says Harmonica, "let them stay. I want to remember their faces." The Sheriff ignores him: "Get out!"

Harmonica says nothing. The Sheriff then pulls a piece of brownish material from out of his pocket: it matches the cluster.

Sheriff: "I see my men have not destroyed your sense of humour . . . let’s try again."

He holds up the duster and the piece of material. "This was found next to the corpses of a man and three kids who’d been shot down. I should charge you . . . I know what you'll say,  you don’t look like someone who’d carry around the proofs of a murder." 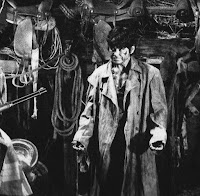 The Sheriff smiles, takes a handkerchief and passes it to Harmonica, who proceeds to bathe his wounds.

"Where did you get the duster?" asks the Sheriff.

"From someone shorter than me." says Harmonica.

"Where is he now?" asks the Sheriff.

"At dinner with his friends." replies Harmonica.

"Where?": says the Sheriff.

"Difficult to digest,"says the Sheriff.

The Sheriff nods: "And what name would you give this particular kind of chameleon . . . what would you say if we called him Frank?"

Harmonica remains cool: "I can see you know a lot about chameleons. Why don’t you try and catch one?" The Sheriff laughs. Harmonica continues: "How much do they pay Sheriffs in this town?"

"Twenty-eight dollars and sixty-five cents a week." says the Sheriff.

Harmonica: "Well, until there’s a pay rise, this city will be infested with chameleons."

The Sheriff shrugs and says: "Sooner or later they turn the wrong colour, and they meet someone who can see them."

Harmonica moves towards the door: "Can I go, while you’re waiting?"

As he walks outside, there are sounds of a scuffle: the three deputies stagger into the stables, one by one. Harmonica appears in the doorway, holding out the Sheriff’s handkerchief to one of the deputies, who has developed a black eye: "Like this, we don’t hold anything against each other."

It's certainly understandable why Donati advised Leone to cut the scene, the "Leone style beating scene" had already become a bit of a cliche after the Dollars Trilogy. The chances of the footage ever being rediscovered are very slim, however the later re-writing would make much of it redundant anyways.