A young entrepreneur launches Far West beer made in Almeria
Juan Ignacio Palaoro, aged 20, has launched a micro-brewery · The Far West brand sells three types: blonde, black and red pepper
Being only 20 years-old and now owning a company in an emerging sector of the province, Juan Ignacio Palaoro, a young agronomist, has launched the brand Far West, which identifies the product with the land, the international scene for the filming of Western genre films.
This beer's is manufactured in its facilities in Níjar. But before we get to marketing the final product, for which Juan has had the support of his family, there’s a story behind the idea, and project. The owner is an Argentine businessman arriving in Spain at age 11. "In the 80s my father made craft beer in Argentina, but not for sale but for consumption for his friends." By metaphorical heredity the brewing are runs through the veins of Juan this is liquid gold and in this case we are not talking about oil, but beer, "This kind of beer, has nothing to do with the trade to those normally used, since it is a 100% natural without preservatives, manufactured in the style of medieval monks and meeting the German purity laws. What makes them 100% genuine beers is the use of pure malt, without additives unfiltered, unpasteurized , conferring distinct organoleptic properties, "says Juan.
The entrepreneur details how medieval monks manufactured the drink: "It consisted mainly of manual work and the nobility of its ingredients, which at the time, and as stated in the Original Purity Law of 1516 enacted by the Bavarian Duke Wilhelm IV, only three ingredients were allowed: barley, hops and water, to which he attributed miraculous properties." John tells the story of those who drank beer did not get sick, "this is simply because the water was contaminated, and during the preparation of beer, which passes through a long boil, were sterilized, and created a healthy drink welcomed by the people." At that time, beer was called liquid bread, "as it was more dense in substance then what we drink now and cheaper, as less grain is used then to make bread, which used was the food in times of fasting for religious purposes."
Beyond the historical class beer, the employer continues his explanation and gives out a sample of the handmade product, "Returning to the Purity Law, and later investigations of Pasteur was discovered the fourth element, the yeast. This is what is actually responsible for the making of beer which is no more miraculous. In fact, there is a saying that goes the brewers “work makes the man, yeast makes the beer,” so it was added to the Act, and later it also included wheat malt, because of the obvious the popularity character of this cereal in many parts of Germany. "
Juan Ignacio began the venture around 15 months ago, "Eight weeks later we had our list of beers." From there we began conducting opinion polls among friends, "Then word of mouth made this start to grow, modifying and improving recipes with input from the views of those who were tested. We never lost sight of our initial objective, in which Almeria should have its own genuine beer."
According to the words of John, each area makes a beer idifferent and has a trace of itself, an appellation of origin. Currently, says the employer, either through transportation or technological advances, you can brew beer anywhere in the world. "Malts, hops and yeast, can travel from their place of cultivation to the place of processing, regardless of their geographical destination." Now these ingredients are common to all beers, what is it that makes them different?. Juan Ignacio answers the question: "Water".
The agricultural technician explains that if the same recipe is used in different cities of the world, we would not get the same beer, and all this because the water chemistry is different. "That's why in cities with tradition they defend their drink beer culture at all costs, such as the rivalry between Düsseldorf and Cologne, Altbier and Kolsch which although only 50 miles apart, also Dormunt, Munich and Rauchbier and many more. Then jumping to Britain we can see the example of Burton on Trent, that in using the waters of that river, famous for its high mineral content makes them special for the production of dark beers. "
Juan Ignacio says that if Almeria had the brewing tradition of the cities mentioned above, "our beer would naturally be black." Special mention, as an entrepreneur, it is for Pilsen beer, obviously the original can only be produced in the Czech Republic, but nevertheless occurs throughout the world because he says, "Changing the water to obtain the parameters of the original; You can make 'pilsner' anywhere in the world, all linked to economic, marketing and advertising."
Far West has not yet defined its annual production, "We started with an installed capacity to produce 42,000 liters per year which we have already reached, so we are studying imminent expansion."
At the factory, which began as a project of self-employment over the disastrous situation of the labor market, Juan, who has the support of his father and brother, though, when the economic and demand require it, plans to add more staff. In its facilities the entire process of brewing is done, "We take care of everything. Mix the four ingredients and it comes out ready to put the bottle in the fridge." 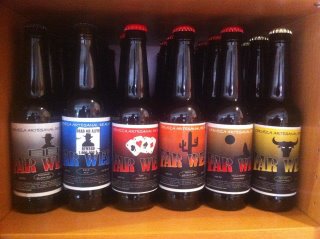 Far West has three types of beer: light blonde very drinkable with low alcohol containing a small percentage of wheat, called Golden Light, a spicier red with a vinous character, which improves over time, with the name Red Wine, and a black body, smooth and well balanced bitterness, called Black Diamond.
Due to its characteristics and small-scale manufacturing, these beers are aimed at a select audience, since it is a gourmet product. This gives, according to John, some advantages over larger companies because they can produce products on demand, which the customer can select their own recipe and offer a variety of distinctive special embellishments, including its own name on the label.
Currently and in proportion to the small production, the company is limited to marketing your product to their customers stable, "To which we owe them for getting this far." But the market has already passed provincial barriers thanks to the internet where it has www.cervezasfarwest.com page. Juan Ignacio jokingly said that a client told his brother he had brought a box in France, "So we can say that we are international."
Even with his achievement Juan Ignacio insists that he will not cross his arms, "Every day we receive email from people who are interested in tasting our beers and even in letters to incorporate them in their restaurants, we are also looking for people passionate about this type of beer you want to distribute our product through the seven counties of this province."
The beer is sold in 33 cl format, but soon to bottle in 50 cl and 75, regarding this latter amount, Far West is already preparing a Christmas special.
Link: http://www.cervezasfarwest.com/#!
Posted by Tom B. at 5:30 AM