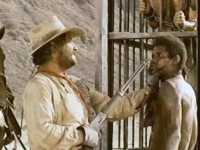 A baby named Johnny is found in the desert by Appleby a gravedigger and becomes his adopted son. At one point Johnny starts picking fights to give himself an excuse to shoot people. He does this to drum up business for his adopted father. The elder undertaker and Johnny one day come across a massacre and Appleby calls the corpses "beautiful" and tells Johnny "We’ve found gold!" Their dream is to open a fancy funeral parlor and cemetery. Everything goes well until Johnny finds a woman and a generation gap develops. Johnny must make a choice between staying with the man who raised him or his lust for the woman. The woman, a prostitute, is abandoned by her outlaw partner after a robbery attempt on a gold wagon goes bad. Johnny eventually leaves the gravedigger to find her.
YouTube link: http://www.youtube.com/watch?v=jsK3nj23Ov8
Posted by Tom B. at 6:05 AM