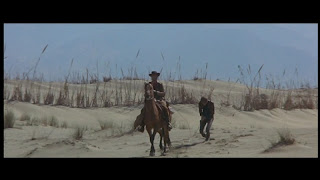 Chad Stark, deserts his regiment to take revenge on a certain Warner, and kills four employees of the Mexican rancher. Stark is captured and taken to Don Miguel for a past grievance; his life is spared provided that Stark brings his runaway son Fidel back to the ranchero. Fidel has joined a gang led by Charlie Doneghan known as "The Major". Stark establishes contact with the outlaw, and succeeds, making up a good excuse to take Fidel home. Once his true intentions are known, Fidel takes every opportunity to sneak away, but without success. During the crossing of the desert, without water and left without a horse, Fidel and Stark are rescued by Josette, a beautidul widow, who is on her way to live with family members at a ranch in California. During a stop in a village, Stark is recognized and imprisoned by a sergeant from his former regiment, Fidel, fortunately, not only takes the opportunity to escape, but is working brilliantly to get Stark freed.  After many tribulations Fidel and Stark return to Don Miguel’s hacienda. Stark realizes that he was deceived: the boy, the result of a marital relationship with Miguel’s wife and the rancher Warner, Fidel has been ordered to be killed. Stark and Fidel however, respond as effectively and eliminates Don Miguel and his henchmen before “The Major” arrives to retrieve Fidel. Another shooting occurs and Charlie Doneghan is killed. Tired of killing, Stark decides to join Josette in California and Fidel goes with him.
YouTube link: http://www.youtube.com/watch?v=_gr-G7gFRho
Posted by Tom B. at 6:14 AM