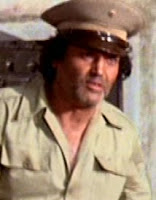 Italian stuntman, actor, location manager and cinema historian Nicola Di Gioia died in Rome, Italy on July 31st. He was 73. Di Gioia was a regular on Marco Giusti’s Stracult and was indispensable in helping Marco find old actors, directors and other film personnel from the Italy’s Golden age of film who had virtually disappeared. Nicola began his career in the eraly 1960s on Sword and Sandal films and the merged into the Spaghetti western genre and continued working till the present time. Di Gioia appeared in seven Euro-westerns: “My Name is Pecos” 1966 (Mexican policeman), “Death Walks in Laredo” 1967 (gunman), “Don’t Wait Django… Shoot!”1967 (Hondo), “Poker With Pistols” 1967 (gunman), “A Stranger in Town” 1967 (bandit), "Son of Django" (1967), “A Stranger in Paso Bravo” 1968 (gunman) and “Arrapaho”1984 [stunts].
Posted by Tom B. at 10:06 AM 2 comments: 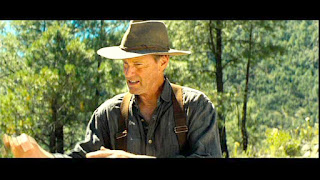 Director, writer, actor, singer, Sam Shepard died July 30, 2017 at his Midway, Kentucky home of ALS. Sam was a multi-talented performer and won a Pultizer Prize for drama for the play “Buried Child” and was nominated for the 1983 Pulitzer Prize for Drama for the play "True West" and the 1984 Pulitzer Prize for Drama for the play "Fool for Love". Sam was twice nominated for Broadway's Tony Award as author of a Best Play nominee: in 1996 for "Buried Child" and in 2000 for "True West." Sam was also bronc and bull rider on the rodeo circuit and was a member of the rock band Holy Modal Rounders (1968-1971). involved with four Euro-westerns: "Silent Tongue" 1993 as director and writer, the modern day "Don't Come Knocking" 2005 as Howard Spence and singer, "Bandidas" 2006 as Bill Buck and "Blackthorn" 2006 as James Blackthorn/Butch Cassidy and as a singer.
Posted by Tom B. at 9:00 AM 1 comment: 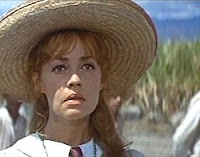 French actress Jeanne Moreau died at her Paris home on Monday July 31, 2017. Her famous sensual presence was backed up with formidable timing and technique, so much so that every major director wanted to work with her - Orson Welles, Michelangelo Antonioni, Joseph Losey and Luis Bunuel among them. Of the three most iconic French actresses of her generation - herself, Catherine Deneuve and Brigitte Bardot - Moreau was the one with the most on-screen authority. Post-war French cinema is unthinkable without her. Known for her husky tones, her other films included 1961's La Notte, directed by Michelangelo Antonioni; Luis Bunuel's Diary of a Chambermaid (1964); and Tony Richardson's Mademoiselle (1966). Orson Welles, who worked with her on films including Chimes at Midnight and his adaptation of Kafka's The Trial, once described her as the greatest actress in the world. Her lone Euro-western appearance was as Maria Fitzgerald O’Malley in 1965’s “Viva Maria!” alongside Brigitte Bardot.
Posted by Tom B. at 7:50 AM No comments:


The Western City in Dasing is in ruins. More than 400 firefighters fought on the Sunday night against the flames. The damage goes into the millions. 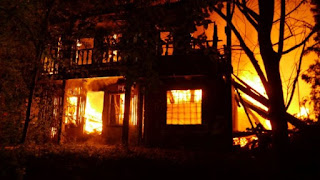 A fire broke out in the night on Sunday in the Freizeitpark Western-City in Dasing in the district of Aichach-Friedberg.

Again a fire in the Western City of Dasing, Germany. Within four years it is the third time that a fire rages in the popular excursion destination. In total, six buildings were damaged or destroyed in the night from Saturday to Sunday by the fire. The property damage is estimated to be in the millions. 40 people had to be brought to safety by the rescue forces at 12.45 am on Sunday morning. According to the police department of Schwaben Nord, three people were slightly injured. One person suffered from slightgas poisoning, two more with cuts when they tried to put out the fire and were hit by flying glass.

The fire broke out in a haymaker, and soon spread to the adjacent buildings. Those present were trying in vain to extinguish the fire. 408 firefighters from the districts of Dachau, Aichach-Friedberg and Augsburg tried to fight against the flames. They were alerted at about 12.45 am and immediately left. The exact cause of the fire is still being determined. Experts from the criminal investigation department are on site. 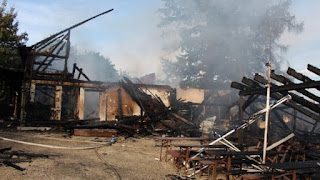 In an adjacent camp, around 16 children were rounded up at the outbreak of the fire. They were promptly evacuated and brought to a nearby evacuation center together with others present residents, animal keepers and actors. The relatives were informed by the responsible police inspection of Friedberg.

The amusement park with its wild-west scenery attracts thousands of visitors each year, when in the summer the southern German Karl-May-Festspiele is presented at Freilichtbühne. As the festival season is running, many of the performers are there as overnight guests. On Sunday, the children's holiday camp in Western City should have been held. "Of course, we had to cancel this because of the disaster," explains Volker Waschk, from the management of Western City. He is still stunned: "I was there myself tonight, but I don’t have the words when I look into the ruined Western City."

Brand in the Western City: destruction is huge

There is not much left from the life of the Western City founded by Fred Rai, who died in 2015 on a horseback ride. Six buildings fell victim to the flames. "Saloon, house, store, museum, even my office - everything is burned," says Waschk. He still does not know how to organize everything. "Computers, documents and much more are burned."

Just as in the past three-quarters of a year, the poor water supply poses a major challenge for fire brigades. Six lines were laid on the pair and some had to be arranged with a shuttle truck. According to police, the grounds of the Karl-May-Festspiele were not destroyed by fire. But the show at the Freilichtbühne is canceled for Sunday evening.

The stables and horses were also were spared by the flames. "This area was not affected," Happach continued. It was only in May that the building application for the new stables, which had also been destroyed by fire in November last year, had been thrown into the Dasing Building Committee. Waschk was glad about the new beginning. A technical defect was responsible for the fire in November.
Posted by Tom B. at 6:59 AM No comments: