A Long Ride to School 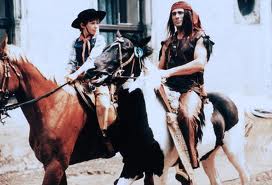 Alex is a bright but day-dreaming boy. At a school assembly, he is reprimanded by the Principal that he is often late for school. His sporting achievements are not mentioned, which or course bothers Alex. Only his athletic teacher Milan (Gojko Mitic) gives him praise, because Alex can earn a coveted medal for the school at the next sporting event. His "enemies" are the students of another school that will be in competition at this athletic event. Alex is riding his bike to school the next day with his girlfriend Maren. He rides it every morning getting there on time, but today there is much to distract him. For example there is a horse wrangler, a nice old man who is traveling with his old horse, who will now use him to pull a horse-drawn carriage and smaller loads. Then he runs into the other students from the other school that will be his competition for the contested medal. As all this is happening, in Alex's imagination a story is developing. His bike becomes a wild mustang, on which he rides. The bad guys want to steal the gold (medals). Alex is assisted here by his Red Indian blood brother, Red Kite (Milan). In the end Alex manages to defeat the bad guys and get the gold back and arrives at school late again.
YouTube link: http://www.youtube.com/watch?v=3kBFQq9yxic
Posted by Tom B. at 7:39 AM