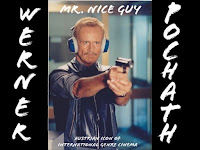 “Mr. Nice Guy - Werner Pochathis” a documentary about the Austrian Icon of international Genre Cinema Werner Pochath who was active from the early 1960´s to the early 1990´s and died way too early of aids in 1993. He was active in Germany, Italy and USA and worked with almost everybody of importance. In the eighties he started a second career leg as an agent in Hollywood.

Werner Pochath was born Werner Pochlatko on September 29, 1939 in Vienna, Austria. A champion skating figure in his youth, Pochath studied acting at the prestigious Max Reinhardt Seminar in his native Vienna. Werner made his stage debut in a 1959 theatrical production of "Die Courage." Pochath moved to Rome, Italy in 1968 to initiate a career in films and subsequently went on to act in a bunch of movies in the horror, action, Western, and exploitation genres in which the uniquely intense blue-eyed and light-haired thespian was often cast as a ruthless psychopathic villain. Moreover, Werner not only also worked as a casting director, but also appeared in a handful of TV shows and continued to act on stage. Pochath was the long-term partner of noted ballet dancer, director, and choreographer John Neumeier. Werner died in Neumeier's arms at age 53 on April 18, 1993. 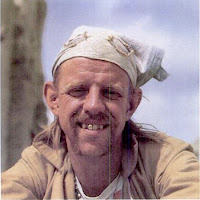 Alexander B. H. Cox was born in Bebington, Cheshire, England, U.K. Bebington, Cheshire, England, U.K. He attended Worcester College, Oxford, and later transferred to the University of Bristol where he majored in film studies. Cox secured a Fullbright Scholarship, allowing him to study at the University of California, Los Angeles, where he graduated from the School of Theater, Film and Television with an MFA. In 1984 he wrote and directed his first feature, the memorable tale of a repossession company and extra-terrestrials, “Repo Man”. The punk-rock edge to his first film became the focus of Cox' next effort, “Sid and Nancy”, a biopic of Sex Pistols rocker Sid Vicious and his girlfriend, Nancy Spungen. Critically celebrated for both films, Cox torpedoed his reputation with the meandering western spoof “Straight to Hell” and the political satire “Walker”. In the 1990s he began repairing the damage with his low-budget, Spanish-language black comedy “Highway Patrolman”. Cox often appeared in cameo roles in his films ala Alfred Hitchcock.
"Cox wrote one of the best books ever published on the history of the European Westerns, "10,000 Ways to Die" which totally redeemed his reputation. It is structured like a novel and has a British centric view and occasionally confuses & misses some points, but a great easy read. As for "Straight to Hell", he just can't leave it alone (haven't seen the new version)" - Michael Ferguson