The Italian composer found inspiration for his critically acclaimed album 'Rome' in the classic soundtracks. 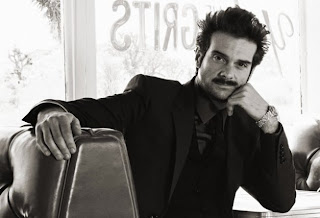 In addition to naming the spaghetti-western-inspired album Rome as one of his editor's picks in the June 2012 Best of the West issue (on newsstands April 17), Associate Editor Jennings Brown chatted with the record's leading creator, Italian composer Daniele Luppi. Luppi took some time off from recording to discuss Rome, Spaghetti westerns, and working with the musicians he idolized as a young boy.

Cowboys & Indians: When did you first learn to appreciate spaghetti westerns?

Daniele Luppi: I grew up in Italy and the only things that were broadcasted by the Italian national TV channel were the Sergio Leone spaghetti westerns. I mean, we had some John Huston westerns, but mostly they were Italian-made westerns. And those movies had those incredible scores by the likes of Ennio Morricone, Bruno Nicolai, and Riz Ortolani — a lot of very talented Italian composers. And without really knowing, I fell in love with those sounds.

I remember I used to record the audio of the film that was being broadcasted onto a cassette. Not through a cable, but straight through the speakers of the TV. So I would ask everybody to be quiet because the tape recorder was catching up all the sounds in the room. And then I would listen in my bedroom to the whole thing, even the dialogue. So I guess I was really immersed in that kind of thing, and when I started to study music and do my own thing it really came out very strongly. And then seven years ago I had the chance to meet with Brian Burton, better known as Danger Mouse, and we really got along very well and I offered [to] him, “Why don’t we go to Rome and do a record using the same session players that recorded the original soundtracks back in the ’60s?” Of course, now they’re all retired musicians in their 70s and 80s. And that’s pretty much how the whole thing came about.

C&I: What was it like working with the men who you used to tape-record in your living room?

Luppi: It was wonderful. Because, first of all, they didn’t have a clue what we were doing. They didn’t know who I was. They didn’t know, especially, who Brian was. And this is 2006 when “Crazy,” the song from that Gnarls Barkley record was being played all over the entire planet. So that was cool, I think. And Brian was a gentleman and hopefully myself as well. We never really said, “We’re doing this and that.” Just, “We’re here for you guys and we love the way you played back in the ’60s.” I think I have always been very respectful of these players and I think they felt that. They felt that trust and they performed our music with their way of playing, which is so unique. That was really a marvelous experience.

C&I: Just how much of an impact did Morricone have on music?

Luppi: The work of Morricone, but also the work of other composers, like Bruno Nicolai, who conducted all the Morricone scores. And other composers like Piero Piccioni, Piero Umiliani, Riz Ortolani — all these guys, they created the sound essentially just by trying to replicate the American sound, the John Wayne sound. They were trying to do that in Italy, so it was made by Italian guys in Rome and that really created a new hybrid in that style of music. Many of the American westerns were classic in the way that they paid more tribute to typical Hollywood score, which was a very large orchestral score, so something very close to classical music. Whereas the Italian composers, because they started to do that in the mid- to late ’60s, I think they were already catching some influences from all the things that were happening in society. So they would incorporate not only strings, but also put in surf guitars, electric guitars that they were using in rock bands. And then when you go into the early ’70s they would even use things like the sitar.

So they created this very interesting combination of sounds from the classical orchestral sounds to a very contemporary sound for the era. Electric guitars and electronic instruments that never coexisted before. It was brilliant. And with images as well, because let’s not forget that in spaghetti westerns there’s not a lot of dialogue, they have a lot of space for music and people could really hear what the music was. And it was not just the typical music that plays for a battle between cowboys and Indians. It was a very unique situation and all the stars were aligned; and let me add that on top of the amazingly talented filmmakers and composers were these incredibly talented performers who I was happy to reunite.

C&I: Did those composers’ restraints impact the music they created?

Luppi: It’s funny because, as much as I will reference those soundtracks, the truth is they made those soundtracks in six hours of recording, whereas we took five years. But yes, that is absolutely correct. Yes, they were completely on budget. I believe the way it worked is they had maybe the orchestra for an hour or so, so you notice the opening scenes of the movies and closing titles are always very large with the orchestra, and everything that’s in the middle is like a flute or an anvil. They were struggling with the budget but that gave them an incredible creativity to really go for one sound that really nails down the atmosphere. It was not that complicated because that single sound really had to be something very raw, very primal, like a drum or a whistle or an ocarina, which is something a cowboy could have done just by himself, or just by riding a horse. So those are old sounds that were very primitive and easy to replicate in a way but worked very successfully with the images.

C&I: How did you decide to bring in Jack White and Norah Jones?

Luppi: I always wanted to have a record that not only had that spaghetti western influence, but also created a breech between the past and the present. So the best way to really do that, I thought, was to have contemporary singers, because the first idea we played with was to find a voice from that era to complement these amazing elderly players from the ’60s. But, thankfully, since we worked on this over the course of five years, we had the luxury of thinking, How do we really make it our own? How do we make something really creatively interesting and different? So we said, “Well, we should get some really contemporary guy that can nail down that end.” And then we had the idea of having a male and a woman — Jack and Norah. And then I remember thinking that half the record should be instrumental so that gives you more of a narration kind of sountracky feel, whereas six songs should be like pop songs. So the female and the male, they were kind of traditional characters. We didn’t want to go very specific, as in, Jack plays this guy and Norah plays that girl. We wanted it to be more of a story between a man and a woman. It has that romantic element to it, although we played with the darker, more sophisticated, but also very visceral aspect of a love story, if you will. It was not a happy thing. We still kept that grave and hard and harsh aspect of those spaghetti westerns as in, there’s death, there’s desperation, there’s struggle. You’re one against nature and the other, which are enemies for the most part. So we liked that it had that acting element to it.

C&I: What was it like working with vintage recording equipment?

Luppi: I think it was Brian’s first time to work with tape machines, but I’ve been doing that for a while because I really believe that there’s nothing like the original that will give you not only the sound, but there is a certain energy, a vibe that comes out of this way of working that is impossible to replicate with a computer. Also, the musicians were used to that. It’s like, if you drove coast to coast in a Ferrari, but then did it with an old Ford pickup truck. Even if you’re just going through the same roads, the experience is so much different. So I wanted to have that experience go a little slower and be more significant.

C&I: I understand you wanted to give yourself more time than Morricone had, but five years?

Luppi: [Laughs.] It took five years because we were involved in many other projects. Brian and I teamed up for the second record for Gnarls Barkley [The Odd Couple]. We teamed up for Broken Bells; we did the Dark Night of the Soul album. He had his own thing. I had my own thing. So, truthfully, we spent about two months every year on Rome. It was a labor of love project. We didn’t have deadlines. We didn’t have a record label, so nobody knew about it besides us.

C&I: The release seemed to perfectly coincide with the production of a lot of modern-day westerns.

Luppi: It’s just complete coincidence. It’s amazing. I’m so happy about that. It’s such a genre in the movies, but also in everything — comic books and even fashion. It’s something very cool that everybody in the world recognizes. Every kid fantasizes about being The Lone Ranger or a western hero at one point or another. Across the world, every country has its own passion for westerns. I just find that extremely cool. Each of these countries has people that dig it. It’s mind-blowing. From the U.S. to Korea ...

C&I: To Italy, where young boys record movie soundtracks in their living room.