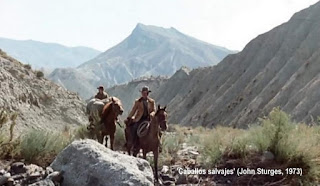 This scene from 1973’s “Chino” starring Charles Bronson. Was filmed in Almeria, Spain with Pico Alfaro the mountain in the background. The same location is shown in 2020. 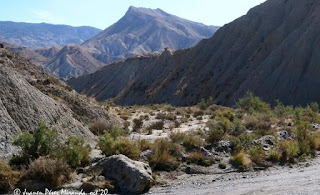 Try your luck in the wild west with Luckslinger on Xbox One, Series X|S, PlayStation and Switch 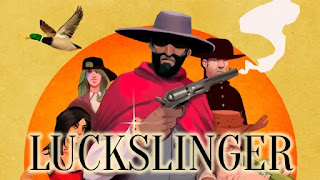 Do you feel lucky, punk? Well, do you? No, seriously, we want to know because it could come in handy for the latest game to hit the Xbox Series X|S, Xbox One, PlayStation and Nintendo Switch if you’re going to succeed in it. It’s probably fine either way though, as Luckslinger allows you to steal luck from would-be bandits in this spaghetti western style action-platformer. So, grab your holster and become a gunslinger!

Luckslinger isn’t your average wild, wild west experience, for it mixes together the rapid-fire gunslinging, greedy anti-heroes and dark humour of spaghetti westerns with a hip hop vibe to the presentation. Your role in this action-platformer is that of a bounty hunter who’s promised a handsome reward for hunting down the outlaws responsible for robbing the town of Clovercreek – the townsfolk want their irreplaceable lucky charms returned, no matter the price. Fortunately, you won’t have to take on the task alone as you’re joined by faithful companion Duckbridge, a duck.

The idea is to kill the bandits you’ll stumble upon in order to steal their luck and improve your own. You see, with more luck comes a better chance of evading bullets, acquiring better loot, and generally avoiding death. Sadly, the opposite is true when you’re out of luck, with outlaws potentially getting the jump on you. Fortune really needs to be in your favour on the quest ahead as you navigate numerous levels with different themes, discover unique elements, and encounter crazy boss characters. Duckbridge is always by your side though, lending a hand during hard times and performing useful actions to aid your exploits.

A completely unique luck mechanic that keeps the gameplay dynamic.

Intense gun and knife throwing gameplay that will keep you on your toes.

Music to pleasure your eardrums that fit the hip hoppy atmosphere of the game.

A duck companion who’s always by your side.

Converse with the nice townsfolk of Clovercreek.

Hidden goldbars for the extra challenge.

If you wish to be the fastest – and luckiest – gunslinger in all the land, then Luckslinger is available right now on the Xbox Store. Before parting with the £9.99 it costs to own, we’d recommend a read of our full review because it will give you a great insight into what to expect. Luckslinger has recently launched on PS4 and will release for Nintendo Switch on 9th April, so be sure to check it out on their respective stores if you’d prefer!

In Luckslinger, you’ll be stealing your lucky stars – be sure to spend them wisely! Partly inspired by the unrealistically fast gunslingers, the dark gritty humour, and the greed driven anti-heroes of the spaghetti western classics. Wholly inspired by vinyl digging, graffiti spraying, rhyming, and the slow jazzy drum samples of hip hop culture and sound. Are you feeling unlucky? In Luckslinger, ride the west of bandits, steal their luck, and use it for your own good. The more luck you have, the more chance you have for bullet evasion, better loot at your feet, and staying alive. However, when you’re “”down on your luck”” in your trusty bracelet, bridges collapse, rocks tumble, and outlaws might know where you’re sleeping that night. In Luckslinger, we rely on the luck of the draw. Clovercreek and the crazy outlaws – The town of Clovercreek has been robbed blind. Six infamous criminals stole the town’s precious luck charms and it’s up to you to bring them back. Get paid the golden price while doing so, because bounty hunters don’t do charity work. Duck friend till the end – At all times you are accompanied by your companion Duckbridge. He returns your throwing knife, grabs extra health and distracts your enemies… but only when his tiny little duck brain tells him to do so.