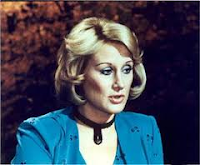 The TV presenter and actress Marisa Medina has died aged 69, having fought the last 2 years of her life against colon and liver cancer. Medina died April 11, 2012 in Madrid, Spain. Marisa had participated in 15 films such as “La casa de los Martinez” (1971), “En un mundo Nuevo” (1972) and  “Si fulano fuese mengano” (1974). Then along with Laura Valenzuela and Paco Valladares became presenters who reinvented Spanish television. At the age of twenty Medina became a TV announcer and then debuted the children’s  show “Antena infantile” (Antena Child). It was the start of an unstoppable career full of New Year’s Eve gala’s for Eurovision. She was the #1 Spanish spokesperson for over 20 years. Then in the 1990s her life turned upside down. After 23 years of marriage she divorced her husband, composer Alfonso Santiesteban, with whom she had three daughters. She began losing control of her life, gambling away her money and became a drug addict which she told about in her 2003 autobiography Canalla de mis noches (Hound of My Nights). In 2009 she began taking chemotherapy and radiation for colon cancer but it didn’t help and spread to her liver. In August 2010 Marisa Medina was last seen on television. The presenter and actress chose the program “'Sálvame” (Save me) to announce that she had only between one and two years of life left due to cancer of the colon and liver which had now become very aggressive. The grim forecast came true on Wednesday. Medina appeared in one Euro-western as Isabel in “Patience Has a Limit, We Don’t! (1974).
Posted by Tom B. at 1:54 PM