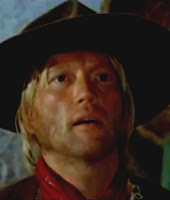 Luke Askew, an actor with 44 years’ experience in the film business, died peacefully surrounded by his family at his home in Lake Oswego, Oregon on Thursday, March 29, 2012. He was born Francis Luke Askew on March 26, 1932 in Macon, Georgia. Mr. Askew, who played numerous roles in film and television, loved acting and had great affection for his many close friends and co-workers in the business as well as his friends in Oregon. He never wished to stop working and was still active until recently.Luke appeared in over 80 films and television appearances among those were 20 westerns and one Euro-western "Night of the Serpent" (1969) as Luke. Askew usually played secondary roles but always stood out and was kindly remembered no matter how small his role. Some of Askew's most noted films were "Cool Hand Luke" (1967), "Will Penny", "The Green Berets" (both 1968), "Easy Rider" (1969), " The Culpepper Cattle Co." "The Great Northfield Minnesota Raid" (both 1972) "Pat Garrett and Billy the Kid" (1973).

You Tube Link: http://www.youtube.com/watch?v=mzqwppFMBXo
Posted by Tom B. at 2:52 PM