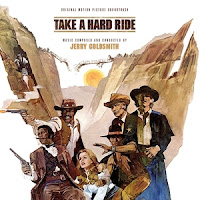 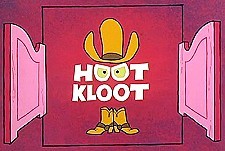 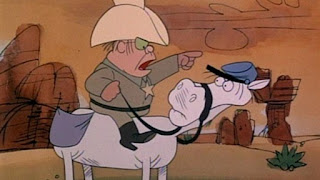 Hoot Kloot was a series of 17 theatrical cartoon shorts produced by DePatie-Freleng Enterprises from 1973 to 1974.

Sheriff Hoot Kloot is a diminutive, short-tempered lawman who tries to maintain order in a remote western town. He is aided by his loyal horse Fester whom Kloot refers to simply as "Horse." Fester remains Kloot's honest and faithful friend, often giving the Sheriff the benefit of his homespun wisdom while battling various outlaws including Crazywolf, a looney sheep-stealing wolf.

Hoot Kloot was later broadcast as part of the NBC Saturday morning cartoon series The Pink Panther and Friends.

Russian composer Georgy Firtich died in St. Petersburg, Russia on January 27, 2016. He was 77. Born October 20, 1938 in Pskov, Russa, U.S.S.R., he was a Soviet and Russian composer, jazz pianist, and professor at Herzen University. Firstich received an honored Art Worker of the Russian Federation. He composed the score for the Euro-western "Armed and Dangerous" (1977).
Posted by Tom B. at 11:18 AM No comments:

The midsummer landscape in Sicily so ripples with dust and heat that it resembles the epic, parched vistas of Sergio Leone’s spaghetti Westerns. This observation—made, Stefano Gabbana said, somewhere deep between Palermo and Catania—was the catalyst for a collection that today incorporated a whole gulch of Western motifs. But while six-shooters, cacti, wagons, cowboy hats, horsemen, and lassos were everywhere on the clothes, they were not in them. That mighty opening shearling poncho apart, there was none of the Wild West–literal—chaps and hats—that we saw the last time this house turned to the prairie, in the turn-of-the-century womenswear collection worn by Madonna in her “Don’t Tell Me” video. 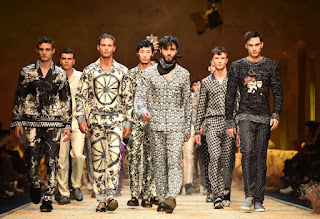 So despite the Morricone and the dusty haze the models kicked up on the runway, this was a collection consistent with the current iterations of the Dolce & Gabbana man. There was the brooding hot-stuff Sicilian workman, out of time, in oversize peacoat and flat cap, or more fantastically in shearling floor-sweeper overcoats, some memorable shearling pants, and rib-knit long johns. There was the cultured aficionado of contemporary luxury streetwear in shearling sweats beaded with the house’s sacred heart and Velcro monk-strap sneakers rimmed with fur. Most present of all was the archetype of international playboy princeling, decked out in precisely fitted piped white shirting and dark tailoring that shimmered with embellishment or tonal jacquard. For the finale, the designers rustled a stampede of silk day pajamas, some teamed with knits: This look, they say, is sparking stampedes in stores, too.

Westernalia was not the only seasoning sprinkled over this collection. Embroideries heaped upon topcoats and trucker jackets—the denim section was one to linger over—included tapestried roses and putti. Buzzing anew was the little bee symbol on gold chains, patches, and pajamas. There were Westernized versions of the same faux-naif illustrations from the designers’ recent mamma-themed womenswear show—one, on a sweatshirt, depicted Domenico and Stefano—and even some meme-tastic illustrations of Zambia, Stefano’s cat. There was so much going on here—the models were using tablets to live-stream point-of-view runway video to the screens above us, too—that through the dust it all sometimes felt like a peyote-fueled menswear mirage. Pull it all apart, though, and what you have is some of the finest top-of-the-line tailoring and extrovert outerwear in the business—plus those D&G-pioneered pajamas (which are now becoming a category all their own).
Posted by Tom B. at 6:28 AM 1 comment: