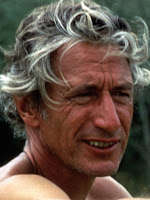 British director John Guillermin, who directed such big budget films as Towering Inferno and King Kong died at his Los Angeles, California home on September 28th. He was 89. Born in London on November 11, 1925, Guillermin directed El Condor with Lee Van Cleef and Jim Brown.
Posted by Tom B. at 5:09 PM No comments:


The Consequence of Sound
By Dominick Suzanne-Mayer
September 26, 2015

In history class, growing up, you learn a very clean, bloodless version of history. To a point, it makes sense; explaining the truest atrocities of man to a child of single-digit age is both a little cruel and a lot difficult. But time and fear sands off the more vicious edges of a great many things, particularly when it comes to America’s formative years. The Keeping Room is a film about Sherman’s March in a fashion, but it considers what it is to be on the losing side at the end of a war from a cruelly human point of view

The film you probably heard described as “the feminist Western” in passing if you happened to attend a festival sometime in the past year, The Keeping Room is more of a deliberately paced tone poem about loss, though both of those descriptors are at least partially valid. After her father and brother were called to fight for the South and never returned, and their mother left them through circumstances left unspoken, Augusta (Brit Marling) runs her family’s modest farm home. With her younger sister Louise (Hailee Steinfeld) and the family’s slave caretaker Mad (Muna Otaru), Augusta tends the farm, sets the table for dinner, and waits for whatever may come to arrive. 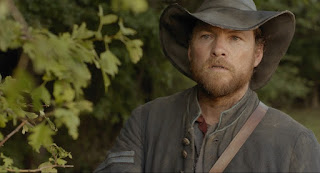 The uneasy delicacy of the film’s early scenes gives way to dread when a pair of apparent Union defectors (Sam Worthington and Kyle Soller) start sniffing around the nearby area, an accident leads to Louise taking ill, and the frail ecosystem preserving the remaining family from the brutality of the new, larger world begins to close in on them. The Keeping Room hails back to the innate terrors of an older world, a world where the coming of darkness covers all in shadow and a lone figure off in the distance constitutes an inevitable, impending evil. Even so much of the daylight captured is full of shadow and the impending setting of the sun.

The film is pointed about its deeper ideas, chiefly what it was and would be to be a woman, particularly a young and appealing woman, during that time. The Keeping Room takes great pains laboring over its wide panoramas of empty, long-deserted lands and the relative size of the women within them, which only adds to the escalating paranoia that its uniformly perfect performances manage. The jaw-set strength that’s always lived under even Marling’s more vulnerable performances is foregrounded here as she has to deny all but her most survivalist instincts, even in the quieter moments where she gets to wonder whether it might not have been nice to be a kept woman, in a different time.

The Keeping Room is quick (perhaps too quick), blunt, and brutal, showcasing the escalating horrors of true vulnerability with a grace and minimalism that exceeds the film’s modest-bordering-on-muted storytelling. To its credit, Julia Hart’s screenplay is most often interested in small notes (a suspicious glance at a bar, the errant firing of a rifle) and the social dynamics within the home than in the more melodramatic Western trappings; it’s telling that the film’s embraces of the Western mode land with less impact than the moments when it concentrates on the inherent sadism of trying to get by in a world like this one. And all of this when somewhere off in the distance, the sky is still burning all the while.

Story: During the waning days of the Civil War, two Southern sisters and a slave must defend themselves against two Union Army soldiers. 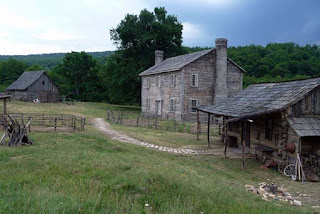 YouTube Trailer link: https://www.youtube.com/watch?v=0LCgZ9AzwaM
Posted by Tom B. at 6:00 AM No comments:

Who Are Those Guys? - Stephen Boyd

William Stephen Millar was born in Glengormley, Ulster, Ireland on July 4, 1931. One of nine children, he attended Ballyclare High School. He starred in a radio play in Belfast and worked at a cinema in London. He is said to have busked outside the cinema to get money. He began acting in British films, notably as an edgy Irish spy working for the Germans, in the World War II film “The Man Who Never Was” (1956). It was his role in a 1957 French film, “The Night Heaven Fell” opposite Brigitte Bardot which gained him critical and public attention.

He then went to Hollywood and appeared as leads in a variety of films, including “The Bravados” (1958) and “The Best of Everything” (1959). His role as Messala in “Ben-Hur” (1959) propelled him to international fame and garnered him a Golde n Globe Award. In 1962 Boyd appeared in the film “Lisa” opposite starlet Dolores Hart. He later played another Roman leader in Samuel Bronston's “The Fall of the Roman Empire” (1964), in which he co-starred with Sophia Loren. He was originally chosen to play Mark Antony opposite Elizabeth Taylor in 20th Century-Fox's epic production of “Cleopatra” (1963) under the direction of Rouben Mamoulian, but eventually withdrew from the problem-plagued production when he committed to star in “The Fall of the Roman Empire”.

Author Joe Cushnan in Stephen Boyd: From Belfast To Hollywood quotes from a letter from film producer Euan Lloyd (who produced such films as “Shalako”, “The Man Called Noon” and “The Wild Geese”), stating: Stephen Boyd was one of the nicest, kindest people I have met in my lifetime, rare in this profession.

Boyd died of a heart attack at the age of 45 while playing golf at the Porter Valley Country Club in Northridge, California. He was in talks to play the role of the Regimental Sergeant Major in Euan Lloyd's “The Wild Geese” before his death. Boyd was interred in Oakwood Memorial Park Cemetery in Chatsworth, California.