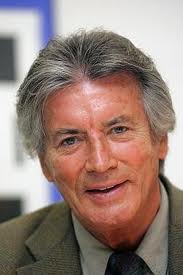 The Death Scene I Like Best "
3/22/2012 by Christian Schroeder
In Cinema Babylon Berlin-Mitte on Saturday March 24th began a Karl May film series. A conversation with actor Pierre Brice about Winnetou, Wild West clichés and Karl May's struggle for human rights.
Christian Schroeder Mr. Brice, you knew Karl May, as you had been offered in 1962 the first major role as ”Winnetou angeboten wurde"?
Pierre Brice No, I had never heard of Karl May. In France he was and is unknown. We read books by Alexandre Dumas and Jules Verne. So I had only not particularly wanted to accept the offer. It seemed to me the role of Old Shatterhand was much more interesting. But my friend and my agent had finally convinced me to accept the role.
C.S. Which book by May did you read first?
P.B. I think that was "The Treasure of Silver Lake". Later, I also read the other books Winnetou, but it was not easy to get French translations.
C.S. And how did you find them?
P.B. I liked the fact that Karl May was trying to convey values. Winnetou fought for peace, freedom, respect and human rights - like me.
C.S. For fifty years the figure of the Apache chief has you totally hooked. Even your autobiography you called "Winnetou and Me". Did you never get weary of Winnetou?
P.B. No, why should I? Every actor wants to succeed - and I had enormous success with Winnetou. I still have, my fans are loyal. I get so many letters and e-mails, sent by young people and children who know the Karl May movies. Winnetou has certainly influenced my life. Before Winnetou I had played villains and murderers, which were forgotten after the screenings. I had just started my career in Italy and had been chosen by the press as the best actor of the year. Winnetou has allowed given me a lot. The Pierre-Brice-aid convoy in 1995, for example. Just because people are familiar with Winnetou, I was able to raise two million marks, money to help people, especially children in the war zone in the former Yugoslavia. 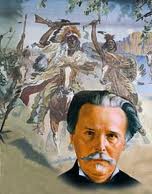 C.S. Karl May died 100 years ago. He was one of the most prolific and successful writers in the German language, but also a con man and convict. What picture do you have of him?
P.B. Karl May is for me a dreamer, as are the people who have devoured his books. Unfortunately, it is read today not by as many young people. This is a shame, because they know nothing about the values ​​that were given to Karl May's figures.
C.S. May only travels in 1908 as a tourist in the United States, long after he wrote "Winnetou". Apaches, he never met. His stories were made more from cliches and his inventions?
P.B. It was in his books, at least in his Winnetou novels, which was not about writing a guide, but to tell a story. The Wild West offers the scenery, but the content is important. Also: You have said yourself that he is one of the most successful writers of Germany, it seems not to have bothered the reader, then, that he did not really know America, as he wrote the books. It also does not bother me.
C.S. Karl May has claimed: "I'm really Old Shatterhand, and I have seen everything." Is this ridiculous or audacious?
P.B. The people who knew him knew that it was not true. He was rather small and slender and had made himself Old Shatterhand was probably something ridiculous. But he has harmed no one, so I would not describe it as bold. He simply had too much imagination, which is no disgrace.
Posted by Tom B. at 5:36 AM