Lucky Lucky and the Daltons 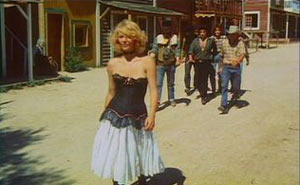 The action takes place in a small village in the western U.S. where the affairs of Billy the Kid, the local pimp are very successful. Indeed, the best deal on the corner, Lulu is working for him and his reputation has earned him all the male customers around. Obviously the league of virtue, led by Maureen O'Lala, does not see all this with a very good eye and is working to close this den of iniquity and the saloon. This is precisely what happens when the new owner of the place, a lone cowboy named John Keykett, is determined to grow his investment by offering the male population schooling with women and alcohol. Alas, it is then that Lulu is the victim of an accident. Always ready to serve, the valiant whore is stuck in bed and can no longer perform her functions. Exhausted by years of toil, she is in need of a break and cannot perform her services of general interest. The customers have become frustrated and want a hasty solution Keykett decides to go in search of the Daltines, formidable whores that could satisfy the needs of the city. Maureen O'Lala and the teacher Lucky Lucky, not insensible to the charms of the beautiful cowboy take advantage of Kaykett’s absence and try to stop Billy and impose moral order.
Posted by Tom B. at 6:11 AM