Silvia Solar, the Frenchwoman who married a bullfighter and razed the Spanish uncover.

Silvia Solar was one of the uncovered actresses of the Spanish film Industry. Born in France, she specialized in vampire roles. 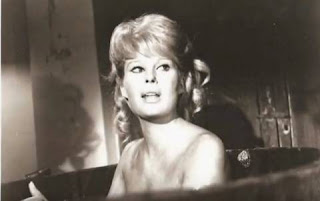 Before the outrageous era of the film of the uncovering in which Silvia Solar stood out, there were already actresses who were usually entrusted with characters of women of bad life, opulent ladies wearing striking necklines, villains showing how much they left the watchman censorship. Then, yes, at the border of the 70s and 80s they were able to show everything they had and because of their mountain bodies. In between, they appeared in the double versions that were filmed in Spain to project abroad.

Silvia Solar was a veteran in those lides, with a filmography that surpassed the eighty titles, in comedies of entanglement and in others of clear sexual content: The Curse of the Beast, Rats do not Sleep at Night, La maison pertdues parades, Girls for Rent, Marital Relationship and Other Things, The Cheerful Girls of El Molino, The Rapists of the Dawn, Sex Trap, Vicious Naked, Those Girls so pu ..., I Look Silly for Weekend ...

Her name was really Geneviéve Couzaín, and she was born in France in 1940, who after winning a beauty contest, established herslef in Spain, where she debuted in the movie The Washers of Portugal, in 1957. She usually developed very secondary roles but in which she dazzled the audience by her blond beauty, her provocative physique. It was very much required by the producers for those vampire roles. A year later, she was included in the cast of The Clarines of Fear , whose protagonists were Francisco Rabal and Rogelio Madrid, she fell in love with the latter, who would be in her future and in real life her crush.

Rogelio Madrid was an extreme Extremaduran who tried his luck in the world of bullfighting. With little fortune then in its beginnings, crushed in the Madrid bullring of Carabanchel (later called Vista Alegre) and was seriously injured by a flag that pierced one of his lungs. This forced him to forget his bullfighting dreams forever. He could compensate, at least, when changing the suit of lights for the profession of an actor, they called him for films related to bulls. Given his photogenic looks he took part in other films, although almost always in episodic roles. A nice hustler when the production companies no longer called him, whom we saw for the last time exercising public relations in some discos and in a restaurant. By the way, his real last name was Mandri, which he altered himself from the capital of Spain.

I don't know how long Silvia Solar and Rogelio Madrid lived together. She developed her artistic facet until 1988, when she made her last film appearance in Barcelona, ​​in Sinatra, which starred Alfredo Landa. She retired to the Costa Brava and died in Lloret de Mar on May 18, 2011, at the age of seventy-one years. Among the many vampires of Spanish cinema, she was probably one of the most suggestive.