Who Are Those Gals? ~ Lorraine Clewes 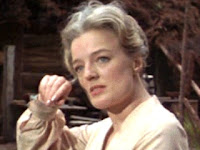 Lorraine Clewes was a British theater, film and TV actress. She was born in Birminghan. England on November 12, 1917. She started her film career in the late 1930s as Alice in 1938’s “Prison Without Bars”. She’d go on to appear in 19 film and television series ending in 1993 with her final film appearance as Tia Anna in “The Milky Life”. Lorraine also was active on stage and appeared leading roles in such Broadway plays as “The House in Paris” (1944) and “Women of Twilight” (1952) She was married to actor James D.C. Liggat in 1940 and they had two children Katrina Bayonas [1941-    ], and  producer, assistant director Susie Ligget. She then married Albert G. Gislingham in 1963. She spent he later life in Madrid, Spain with her daughter Katrina and died there in December of1996.

Her only Euro-western appearance was as Clara in the 1971 film “Pancho Villa” starring Telly Savalas, Clint Walker, Chuck Connors and Anne Francis.