Day of the Stranger – English title

Caine Farrowood is a bounty hunter who works under the control of ruthless kingpin Loomweather. One day a bounty retrieval goes awry and Caine is left for dead. Just when he thinks his life is over he mysteriously awakens back home to the comforts of his wife Christina. Baffled and confused by how he got home Caine insists on finding answers, but before long he is enlisted in the retrieval of another bounty. This one is huge and may cost Caine not his life, but his sanity when he finds himself pitted against somebody who may very well be the fallen angel himself. 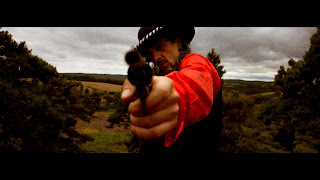