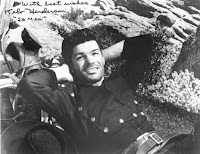 American actor and trick gun specialist Kelo Henderson died in Irvine, California from complications following an operation. He was 96. Born Paul Lars Henderson Jr. in Pueblo, Colorado on August 8, 1923 he was a foreman on a ranch before working as an actor. He appeared on several western TV series before being cast as Ranger Clint Travis in 1957’s “26 Men” which ran for three years. Later he taught actors fast draw and other gun tricks. His young son Paul Lars Henderson was so good with six-gun tricks he was hired as Matty Matel and was seen in many commercials for Mattel’s Fanner .50. Kelo’s other son John Eric Henderson was also featured in the commercials. The pair often put on exhibitions. Kelo went to Germany in 1964 and appeared in “Pyramid of the Sun God” followed by “Treasure of the Aztecs” in the role of Frank Wilson. While making the two films Kelo was used to train the other actors how to use their weapons and how to ride horses. Later in life he appeared at many film festivals and was usually busy taking photographs instead of sitting behind a table signing autographs. He received a Golden Boot for his western work in 2003.
Posted by Tom B. at 10:01 PM