Who Are Those Guys? ~ Dante Cleri

Dante Cleri was born in Rome, Lazio, Italy on March 28, 1910. Cleri was not only active as an actor, but also as a singer. He began his career as an actor in variety shows and Italian theaters of the 1940s and 1950s. During a show at the Teatro Alcyone in Turin in 1961 he was discovered by Aldo Zanfrognini. Aldo just left Brutos Zanfrognini, he proposed to join Cleri as a partner. For six months Cleri remained in the vocal ensemble, with previously scheduled tours in the United States on the plan. After Maccione returns and Zanfrognini decides to start another group, Dante Cleri is kept as a member. Together they founded "Les Cyranos". Other members besides Cleri were Aldo Trentini (saxophone, flute), with his wife Loriana Bassini (solo part), Aristide Cesari (guitar), Piero Querzola (vocals, percussion) and Gilberto Forti (piano, arrangements). Together, the group recorded several records, which also led to various tours. The band even made an appearance in the 1963 film "Sexy High Voltage" by Oscar De Fina. The group disbanded in 1967. 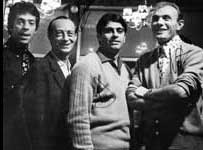 Then Dante Cleri returned to acting. He played mostly decent and friendly characters that were seen in Italian comedies. He often appeared with Franco Franchi and Ciccio Ingrassia. In addition to the comedies, Cleri was also seen in westerns, police and erotic films. One of his best known roles was that of bookkeeper Quintino Braglia in “Il Presidente del Borgorosso Football Club”, along with Alberto Sordi. Another fun role he appeared in was "L'esorciccio". Cleri is probably best remembered for his many roles in the Bud Spencer – Terence Hill films. His engagement began in 1968 in the movie "Ace High". His role was relatively small, as he was seen as a banker without any dialogue. In 1969 followed two more films with the duo. He shot "The Five Man Army" with Bud Spencer and "Boot Hill". Again, his roles were relatively small, as he was seen as the mayor and Fisher's assistant. Two years passed. 1971 came and for Dante Cleri three new job offers. He was hired to play a role in “Trinity is STILL My Name”, “Four Flies on Gray Velvet?”, and “It Can Be Done… Amigo”. Even with these films, the roles were rather small, but in "Four Flies on Gray Velvet" he received his first speaking role alongside Bud Spencer. The merchant was dubbed by Herbert Weißbach. Also in "It Can Be Done… Amigo" he was heard as Doctor Eisenbart, but dubbed by Klaus Miedel. Other Spencer / Hill films with Dante Cleri were "The Hassled Hooker”," "Man of the East", "Even the Angels Eat Beans" and "They Called Him Flatfoot."

However, he was not restrained with only comedy roles, but also some serious character parts such as "Il cinico, l'infame, il violento" playing once again an accountant. He was also active as a voice actor. At the end of the 1970s Dante Cleri ended his career in the entertainment world.