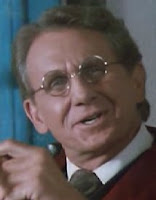 René Auberjonois, an actor who rose to prominence with roles on ‘Benson’, ‘Star Trek: Deep Space Nine’, and the film “M.A.S.H.”, died Sunday December 8, 2019 at his home in Los Angeles of metastatic lung cancer, the Associated Press reported. He was 79. Auberjonois was born in New York City on June 1, 1940 and was a character actor and performed in theater of the 1960s. He made the transition to film in the 1970s, and appeared on a string of popular television series in the 1980s and ’90s among which was his only Euro-western appearance in Terence Hill’s ‘Lucky Luke’ as Mr. Edgar Rockbottom / Mendez in the 1992 episode ‘Cafe Olé’.
Posted by Tom B. at 3:48 PM