For the realization of the great set of Flagstone the town of “Once Upon a Time in the West” (1968) the area immediately north of La Calahorra station was chosen, an open and very photogenic area thanks to the magnificent background (towards the north) constituted from the Sierra de Gor-Baza. The land was owned by the Garcia Ruiz family and was rented for ten years, where there was a farmhouse that is integrated into the complex designed by Carlo Simi, with the collaboration of Carlo Leva. Famous for the appearance of the city of Flagstone in “Once Upon a Time in the West”, where Jill (Claudia Cardinale), leaves the station building and starts towards the main road. The camera lift rises above the wooden tiles of the roof of the building to reveal the city, while the voice of Edda de Orso launches into a crescendo. In a subsequent sequence we then see Jill in Sam's buggy (Paolo Stoppa) crossing the main street of the city, which is similar to a construction site: a swarm of men on foot and on horseback, wagons, a horse-drawn tram loaded with passengers, workers. The town of Flagstone is a very expensive set, which included about thirty buildings located on the main road south-north: the station; the large barn where carts and buggies are also rented: the large hotel-saloon; the bank; shops; the new theater (under construction); the Chinese laundry; the blacksmith workshop; the barber's shop; warehouses and, at the end of the built-up area (to the north), the sawmill. While some buildings of the set consist only of the façade, others are complete, therefore suitable for internal filming, such as the railway station, the large barn, the hotel-saloon, and the barber's shop. The hotel-saloon, the bank and the theater, which have considerable dimensions are of a solid brick structure, and still survive, even if reduced to skeletons. There is also some walls of the building of the large stable, built in adobe, characterized by a high pyramid-shaped chimney, also in adobe and with wooden armor. The remains of this building was subsequently incorporated into a structure that includes a complex of sheds that host flocks of sheep and goats. Today, the former hotel-saloon is part of this structure, which was originally enriched with a wooden portico on the front and on the west side and a covered terrace (also in wood) on the first floor. On the brick wall on the front side and on the west side was the inscription "The Gold Coin Palace Hotel" and on a wooden sign on the front "Flagstone Saloon". The great set of the city of Flagstone, with some changes and enlargements, was then used in the film "The Price of Power" (1969) by Tonino Valerii, in which it represents the city of Dallas (Texas), and then in two western co-productions from Rafran, the movie house created by Sergio Leone. In the first – “My Name Is Nobody” (1973), directed by Tonino Valerii - it represents two distinct cities: the one in which Nobody (Terenece Hill) happens upon during a fair and where he demonstrates his ability to use the gun to Jack Beauregard (Henry Fonda) and where, subsequently, the two witness the arrival of the knights of the Wild Bunch. The last part of this film also uses the nearby station: La Calahorra: and the set for the sequence in which Terence Hill steals the train on which the soldiers have loaded gold bars; to the east a warehouse appears (with a curved roof made of sheet metal) on which there is the inscription "Magazine Golden Plume Limited", which can still be seen. Also in part of this sequence is the "Public Urinal" scene shot by Sergio Leone. The successive sequence of the battle between Henry Fonda and the knights of the wild and filmed along the railway linking the station of La Calahorra with the mines of Alquife (it is framed on both towards the Sierra Nevada and towards the Sierra de Gor-Baza) and takes advantage of the splendid and ample scenery of the Llanos of the Marquesado of the Cenete.

In the second western by Rafran – “The Genius” (1975), directed by Damiano Damiani - the set of the city built for “Once Upon a Time in the West” represents Tucumcari (New Mexico) in the second sequence (which also includes the opening credits) in which we see the protagonist arrive, Joe Thanks (Terence Hill), with the diligence and then challenge the gunslinger Doc (Klaus Kinski) on the "Main Street". For this western, the saloon building is renovated, with large terraces on the front side, where the sign "Chaco Canyon Saloon" appears. And the set then represents Phoenix (Arizona) in another sequence. After this film the set built at the La Calahorra station is no longer used by the cinema and falls into disrepair. All the useful material is taken by the inhabitants of neighboring ranches and homes. But a few years ago its surreal atmosphere, as a phantom city, was rediscovered and enhanced for commercials: as an example the brick skeletons of the surviving edifice appear in a commercial for the country music CD "On the Road", in which you can also see the road that, going through the buildings themselves, goes towards Churches and the wide surrounding scenery. 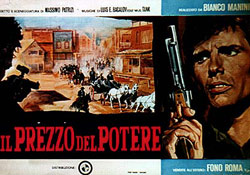 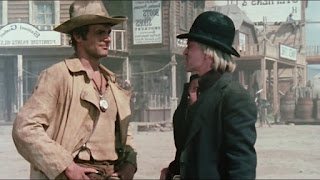