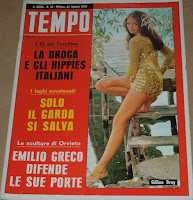 "A meter and a half of bunny"

”They were looking for a tall, very tall actress or the movie couldn't begin. The director had seen an infinity of girls from the size we say were extraordinary, but none was fine, because each was either oily, or too old, or wooden, while it needed a type that was also sexy, half woman and half child, half a giant by fairy tale and half earthly creature. Able to fall in love, be used as an object, being killed in the end as too bulky a presence. One day I happened in the production offices and in a flash they engaged me and the role was mine. That's how I made my debut in the cinema”, says Gillian Bray. The film she talks about is "I milanesi ammazzano il sabato", directed by Duccio Tessari and her role was that of the female protagonist, alongside Raf Vallone and Frank Wolf.

The "giantess" really has something extraordinary. Extraordinarily long are the trained legs of a dancer, the talking arms that protrude themselves like helices in the air, their hands strong and slender.

”In Italy, everywhere I go, they all look at me in awe and I don't understand why’, she says. “I'm getting used to it now, but in the beginning I was a little annoyed. Basically I’M not a freak show. Without cotton and without shoes I measure one meter eighty-two. Sure, With heels and with toupees on my head, I grow again, But it's just centimeters stuff”. 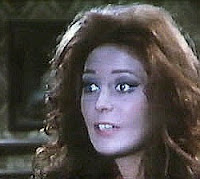 A river of gold

She is 23 years old and is of English nationality. She has lived in Rome for a year and does not speak a word of Italian. She too belongs to that large group of foreigners who happened to be here perhaps by chance and who then chose not to leave. They talk about climate and human relationships. But it’s also a question of love, which is revealed to her here as never before, and of the possibility of working, which here, more than elsewhere, is granted. She came to Rome at the invitation of an entrepreneur who saw her in London and had her come to dance in a little show. "Luci di Trastevere", with which a new theater was inaugurated. But, between tests and replies, everything lasted only two months. When the doors of the theater closed, she remained anyway. Meanwhile she had met the man who did it for her, a Greek actor who has lived and worked in Italy for years.

”In Rome, in short, I was born as an actress, and I hope that Rome now makes me a star”, she declares sincerely. Without even a modicum of modesty, she does not lack work and the money she earns seems to her a river of gold that, unexpectedly, flows in front of her. She spends it in the most insane ways - she takes a plane and goes to London to buy herself a suit: “Because it costs less in London”; she fills the house with trinkets and souvenirs, and then shoves them under the sofa - piled in a suitcase - because the house still lacks furniture on which to place them; assailed by indecision, between the purchase of a jewel and that of a swimsuit, both of them are bought; if she manages to put aside a nest egg, she immediately sends it to her mother not because she needs it. But so, because she will know that I am well and want to know she is happy. The days unfold for her in a continuous party. There are party calls from friends, job offers, swimming in the pool, horse races, the parties that she never misses, the travel plans on which spasmodically is allocated, even if the journey is no longer done because a work commitment has occurred for her or her partner.

The most frequently used adjectives are "exciting", "fantastic", "wonderful", "terribly dramatic". "Horrible" was the boredom that troubled her as she was forced to live in the province. "Anguished" is the shyness that afflicted her in her adolescence, when her body began to grow - after twelve years - so far out of the ordinary. The "jealous" jealousy she felt when the sister she loved married and she came to want to kill her brother-in-law. A sort of childish candor has remained in her character, and surrounds her with a mythical aura the experiences she has made and the memories of her past.

Until she was eighteen she remained in Yorkshire, a country of farmers and fishermen. She goes to school, but the studio doesn't like it at all and just waits to be able for her to stop. She has a lot of friends, but in the end the greatest fun is listening to records. At home a certain hubbub reigns: Her father is a fisherman and her mother has to look after a real tribe. There are five brothers, all very tall - one is a royal guard, one is a model, another is an athlete - all of them by age are very lively and arrogant. At the age of sixteen she saw London for the first time and was enchanted by it: “There is something to enjoy”; but for two years she still has to obey her parents, "who were not entirely wrong, because I was as big and developed as I am now, but I still had a brain like a child". At eighteen she is in London. She lives in a room furnished with a sister, they have very little money, but it is still better than the one they left behind. The first job they find is in a very elegant private club in the West End, where they serve customers in the gambling hall, “It was a shock to see so much money wielded, to lose huge sums without flinching. The stench of the nose and the snobbery of those people was also a beautiful lesson”, she says. Obviously it couldn't last. In fact, she read an advertisement that required girls to be hired among the Bluebells, she introduced herself and signed a contract for eighteen months.

She went to Las Vegas. “For a while everything was wonderful. Absolutely chic people. Guys like Elvis Presley or Frank Sinatra who’d invite you to drink with them at their table. But then you realize that nothing new ever happens and people like that all look alike”, she recalls. In short, she starts to get bored. Taking advantage of the preference that the director of the complex has for you and breaks her contract. Back to England. Also because she believed she could not live without a guy she had fallen in love with. Instead she realizes that she can do very well without it and finds another job. This time she becomes a bunny, a bunny from the "Playboy" club. “An indescribable effort. Hours and hours of standing. A discipline that that of the school, in comparison was nothing. Penalty for a stretch mark in stockings. For a broken nail, for not perfect makeup. And when to gains, there was little to be happy: all appearance and no substance”. Obviously this work would also end.

The beautiful Gillian Bray scratches, and finally makes her choice. She is no longer the provincial girl who gets excited before the money of others and the beautiful clothes of the ladies she serves. She want money and nice clothes. From appearance she wants to become the protagonist. From a figure that acts as a background, she wants to come to the fore. “I could no longer bear to be called by name”, she says reflexively. “Both among the Blue-Bells and the bunnies, I was a Bluebell or a bunny, not Gillian. It was a very bad thing. For this reason, at a certain point, I realized that I wanted to become an actress, to use my face and my body to represent how I could be a character. With the cinema I look for money. It's true. But I also try to be myself, to affirm myself for what I am, beautiful or ugly, regular or unusual, silly or intelligent”.
Posted by Tom B. at 5:15 AM