Aldo Maccione is 84 years old. A resident of France for several years, he was part of the Brutos comic-music quintet. After years of work in the music hall, he established himself as a valuable comedian in many Italian and French films.

Aldo Maccione is 84 years old. He has been living in France for several years and is  part of the I Brutos comedy-music quintet . After years of work in the  music hall, he established himself as a valuable comedian in many Italian and French films. After winning a radio competition at the end of the fifties, he joined the cabaret-music group from Turin de I Brutos, with which he achieved great international success, performing among other things triumphantly at the Olympia  in  Paris. In the mid-sixties he left the group and founded a similar one, known as Los Tontos, with which he performed for six years in a row at the Emporium of  Barcelona. Sacha Distel accompanies the tour of London and Paris (still at the Olympia), who coined the nickname "Aldo la Classe" for him. In 1970, Claude Lelouch, who had known Maccione since the Brutos era, having directed him in some  scopitons, had him debut as a soloist with the film La rogue, and recalled him in 1972 in  L'avventura è l'Aventura  where he was one of the four protagonists alongside Lino Ventura,  Charles Denner and  Jacques Brel. The following year he returned (after the unfortunate Brutos films) to Italian cinema with two films related to the character of Colonel Buttiglione. Between the seventies and the early eighties, Maccione divided his time equally between Italian and French cinema, preferring in both cases brilliant roles. In Italy his greatest popularity comes thanks to some films played in tandem with Renato Pozzetto  (Due cuori, una cappella,  Sono photogenic,  Fico d'India,  Porca vacca) and to some scoffed comedies, in France thanks to the films starring alongside Pierre Richard (Sono timido… ma lei mi cura, C’est pas moi, c’est lui).

In the eighties, Maccione's activity is increasingly concentrated in France: these are the years of his final consecration in the French box office as the protagonist in modest comedies (often directed by Philippe Clair and mostly unreleased in Italy) where he perfects his character of “Aldo la Classe” (already celebrated in 1972 also in a homonymous song by Maccione himself), a typical caricature of the Italian seducer and a bit of a Gascon, with an unmistakable speech and a characteristic way of walking (the “marche du séducteur"). The success is such that some old Italian films are also distributed where the Turin actor has only supporting roles and that are passed off as Maccione's new films. At the end of the eighties, following a couple of failures, he abandoned this character to try to move into different roles. Between 1991 and 1995 he plays in four films for the TV series Aldo tous risques. In 1994 he returned after twelve years to star in an Italian film, playing a layman in Perdiamoci di vista by Carlo Verdone. In 1997 he worked with Bigas Luna for The Image of Desire  and in  2002 he was a godfather for Aldo, Giovanni and Giacomo (The legend of Al, John and Jack). He returned to acting in a wholly French production after more than three decades in 2005, in the film Home Works - Travaux.

In 2010 he took part in the reality show La Ferme Célébrités  (lett. "The Farm of the Famous"), from which he retired due to health problems. In November 2010 he received the 2010 Career Award  at the  MonteCarlo Film Festival. The actor appears, portrayed in his typical walk, as a  guest-star  in the 29th album of the series Asterix, La rosa e il gladio (La Rose et le Glaive, 1991), in the role of a Roman legionnaire who would like to serve in a legion of women. His walk is imitated by the character of Toni, a fan of "Aldo la Classe", in a beach scene of the movie Mektoub, My Love: singing one of Abdellatif Kechiche in 2017. He currently resides in Saint-Paul-de-Vence. 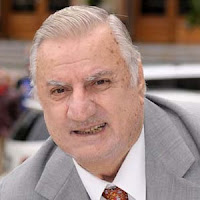