Who Are Those Composers? ~ Mario Nascimbene 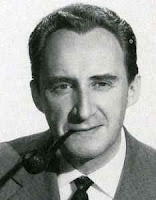 Mario Nascimbene was born in Milan, Lombardy, Italy on November 28, 1913. He studied composition and orchestral conducting at the  Giusepp Verdi Conservatory of Music in Milan under the guidance of Ildebrando Pizzetti, Following graduation he wrote several pieces for chamber music and ballet.

He was commissioned to write the soundtrack for the film "L'amore canta" (Love Song), directed in 1941 by Ferdinando Maria Poggioli, and the success of this film opened the doors of an entirely new career for him. He was one of the few composers in Italy whose career was based on his work in the cinema.

He was particularly appreciated for the revolutionary innovation of incorporating the sounds of non-orchestral instruments like that of a jaw harp or a harmonica, everyday noises (like the tick-tock of a clock, the ring of a bicycle bell or the ticking sound of typewriters in Rome 11:00) in a musical score, with the purpose to underline some particular film scenes. This preceded the works of Ennio Morricone who was also known for incorporation non-orchestral instruments into his compositions.

After World War II he developed an artistical partnership with such famous Italian film directors as Giuseppe De Santis and Roberto Rossellini. His work found acclaim in the United States, where he was invited to Hollywood to compose the score for famous films, including “The Barefoot Contessa” directed by Joseph L. Mankiewicz in 1954,
“Alexander the Great” directed by Robert Rossen in 1956, “The Vikings” directed by Richard Fleischer in 1958, and “Solomon and Sheba” directed by King Vidor in 1959. These scores were conducted by Franco Ferrara, the great conductor and lecturer on conducting at many academies of music around the world.

Nascimbene was one of the best known Italian film soundtrack composers of the 20th century. His career spanned six decades, during which time he earned several awards for the innovative contents of his composing style. During his career he composed soundtracks for more than 150 films.

During his career, Mario Nascimbene won three Nastro d'Argento for Best Score awards in 1952 for “Rome 11:00”, in 1960 for “Violent Summer”, and 1968 for “Pronto... c'è una certa Giuliana per te”. He was also nominated for a David di Donatello Award in 1990 for his work on “Blue dolphin - l'avventura continua”. Although he did not win the prize that year, Nascimbene was awarded a "Career David" from the David di Donatello Awards in 1991 honoring his lifetime achievements in film music.