We continue our search for filming locations for “Day of Anger”. Scott is ordered by Mr. Miller to sweep up the front of the Skills’ house. He walks over and the beautiful young Vivien Skill pokes her head out of the window and says hello to Scott. He replies and then Mrs. Skill comes out the front door and tells Vivien to get back inside and for Scott to sweep up. As Scott is sweeping he sees a stranger ride slowly down the main street of Clifton. The rider stops as Scott walks into the street to greet him. He asks if the stranger is looking for something and he replies a stable and a good hotel. Scott tells him where the stable is and to try the Gala Saloon. The stranger asks who the boy is and he replies Scott. Scott what the man asks. Scott says he doesn’t have a last name and the stranger asks what his mother’s name was and he replies Mary. The stranger aks why not call yourself Scott Mary, but Scott says the town would only laugh at him. The stranger offers Scott a dollar if he’ll take his horse to the stable and then look him up at the Gala Saloon for his pay. He tells Scott his name is Talby. 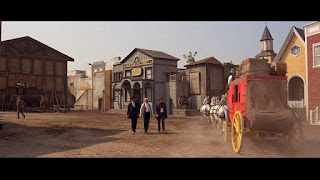 The scene was filmed at the Cinecittà Studio western set in Rome, Italy. 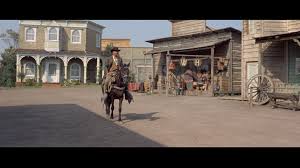