Story: One Eyed Jack and his partner have traveled the American West on the hunt for the man who gave One Eyed Jack his name: Calamity John. At a seemingly serene spot in the California woods, they finally meet. It won't be serene for much longer. 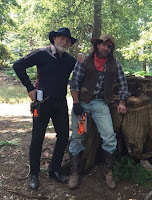