Who Are Those Guys ? Gianfranco Clerici 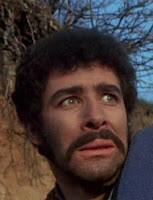 Gianfranco Clerici is an Italian writer of numerous screenplays for Italian film and television productions and occasional film actor. He has collaborated with several directors of exploitation cinema, including Lucio Fulci and Ruggero Deodato. Many of his scripts went on to become controversial films.

Clerici began his career writing genre films, such as spy thrillers (popularized by the James Bond series) and spaghetti westerns. As genre films fell out of favor with audiences, he moved on to writing giallo films, including “Don't Torture a Duckling” and later “The New York Ripper”, both directed by Lucio Fulci. He also wrote several crime films, including “A Special Cop in Action” and “Blazing Magnums”.  Toward the end of the nineteen seventies, Clerici began to write scripts for more exploitative films, such as “Emanuelle Around the World” and “Nazi Love Camp 27”. Also around this time, Clerici began his famous collaboration with director Ruggero Deodato. He wrote the scripts for “Last Cannibal World” and “The House on the Edge of the Park”, the latter of which was filmed in 1978, but remained unreleased until 1980.

Another Deodato collaboration, Cannibal Holocaust, became his most famous screenplay due to the controversy the film caused upon its release. Ten days after its release, the film was seized and Clerici, Deodato, the film's producers, and a representative of the distribution company were arrested for obscenity. Deodato was later charged with murder after claims had been made that actors were genuinely slain for the production. When these charges were all proven false, all the defendants were fined and received a four-month suspended sentence after being convicted for obscenity. Clerici continued writing screenplays throughout the nineteen eighties for both theatrical and television productions. His last projects were mainly made for television movies and television series.

During his career he also appeared as an actor in several films including supporting roles in four Euro-westerns being billed under the aliases Mark Davis and Mark Devis.