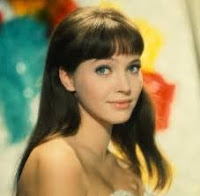 Anna Karina, the Danish-born actress who became a symbol of the French New Wave, or Nouvelle Vague, in Jean Luc Godard’s 1960s films, died on Saturday in Paris. She was 79. Whether playing a streetwalker or a terrorist, Ms. Karina managed to look flirtatious, with her dark hair, wispy bangs, heavy eyeliner and lycée-chic wardrobe of sailor-uniform tops, knee socks, lots of plaid and perky headwear, from berets to boaters. Karina also pursued a singing career, with late-1960s hits like “Sous le Soleil Exactement” and “Roller Girl,” written by Serge Gainsbourg. And she wrote four novels, including “Golden City” (1983), which she described to the quarterly Film Comment as “a kind of thriller, with gangsters.” Anna Karina appeared as Clara in the 1971 TV pseudo-Euro-western “Carlos” which also starred Gottfried John, Host Frank, Geraldine Chaplin and Thomas Hunter,
Posted by Tom B. at 8:53 AM