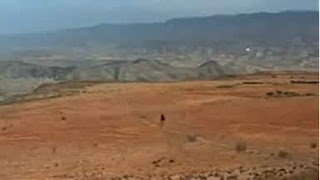 In the opening shot of “For a Few Dollars More” off camera we heara voice humming and then whistling to himself as he watches a lone rider slowly ride toward the camera. It was Leone himself that did the whistling. Leone really wanted to depict the West as he felt it would truly have been and immersed himself in the atmosphere that he believed would have existed to create the right image. In fact he felt that the American view of the West was extremely naive. In one interview he stated: 'The Americans have always depicted the West in extremely romantic terms - with a horse that runs to his master's whistle. They have never treated the West seriously, just as we have never treated the ancient Rome seriously. Perhaps the most serious debate on the subject was made by Kubrick in the film 'Spartacus': the other films have always been cardboard fables. It was this superficiality that struck and interested me.'