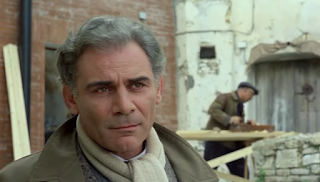 "There is no single and precise technique. You can interpret a character in total immersion, but the opposite can also happen. Diderot maintains that the actor, while communicating to the spectator a great emotion by exploring the disturbing territories of the tragedy, perhaps thinks of the restaurant where he will go to eat after the show". Thus an ironic Gian Maria Volonté (1933-1994) who was remembered 25 years after his death, as well as an exhibition at the Porretta Terme Festival, with two days dedicated to him, the first at the Casa del Cinema in Rome with a round table moderated by Fabio Ferzetti and scheduled after the screening of the restored version of “Sacco and Vanzatti” (1971).

The idea of ​​this film is the story of two Italian anarchists, who emigrated to the United States and were unjustly sentenced to death for a robbery armed with two victims, comes to Giuliano Montaldo after seeing a piece about those events in a Genoese theater. Three years will pass, the director recalls, before finding someone willing to finance the venture, in the person of Arrigo Colombo, the producer of Sergio Leone 's “For a Fistful of Dollars”. And long is the search for locations - Dublin and Boston - capable of restoring the atmosphere of early twentieth-century America.

Volonté plays Bartolomeo Vanzetti, more politicized and militant than Nicola Sacco (Riccardo Cucciolla), a character that Volonté played in the play "Sacco e Vanzetti", directed by Giancarlo Sbragia. "Gian Maria was the fundamental thrust of the film, his character lived day and night - says Montaldo - his relationship with acto Cucciolla was protective as it was in fiction. And then he wrote and rewrote, at least three times, his lines, in black school notebooks".

An actor's method that Felice Laudadio well remembers, having known and frequented Volonté: "For every role he took two, three months of time, of absolute concentration, then transcribed minutely on a first grade school notebook the script, then on a second his lines, changing the words and finding the most suitable for the character and even his physiognomy. Finally the third notebook reported the lines in the final version. Obviously this perfectionism, was an added value, which often created problems and clashes with the directors, Elio Petri and Gianni Amelio know something about who directed it. "The actor Volonté is therefore not only an interpreter but also an author. "He changed the social conception of the actor, engaging himself personally in the voice / facial battle, very participated at the time – underlines Franco Montini openly opposing and promoting the strike of the actors against the custom of doubling many performers, as indeed happens to him in the two westerns of Leone ”.

The intellectual Volunteer emerges here with arrogance, the man of the left for a period close to the Communist Party, the generous and committed "street companion" in the political battles of the 60s and 70s. "The Unit was presented to the newspaper, where I held the position of head of the editorial team for culture and shows - Laudadio recalls - asking me decisively to publish a statement on the voice / face issue, despite my warning that it would probably cause a hard reaction from the producers. And in fact Gian Maria is blacklisted and that's when his international career begins". And always Laudadio returns the image of a Volonté engaged, during the political elections, in a tour that takes him to meet the Italian immigrants of Switzerland and Germany to support the vote to the PCI.

But the artistic greatness of Volonté remains in his mimetic ability, in being everything and the opposite of everything, without ever identifying himself with a mask, with a human prototype, as Montini points out. From the cruel Mexican bandit of “A Few Dollars More” (1965) to the enterprising head of Eni in “The Case Mattei” (1972); from the exalted and assassin inspector of the political office of the police station in “Investigation on a Citizen Above Suspicion” (1970) to the melancholy Aldo Moro of  “Il caso Moro”  (1986); from the rebel officer of “Uomini contro”(1975) to the ambiguous head of the Italian-American mafia in “Lucky Luciano”(1973).

"His way of acting coincides with the construction of an identity that has an independent life - explains the psychotherapist Giovanni Savastano, author of the book" Gian Maria Volontè. I therefore act"- He does not descend into the character, he becomes it, I do not go out nor do I enter the character 'as he himself suggests." The result of this 'Volonté Studio' is each time a journey inside the character to metabolize it, to do it even obsessively. Too bad not having seen it applied in that filmic project for some time cherished by a Don Quixote next to a Sancho Panza interpreted by his friend Paolo Villaggio.
Posted by Tom B. at 6:27 AM