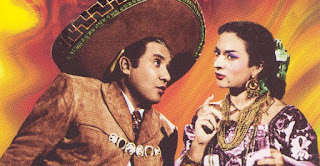 On a highway from Mexico they drive to the capital, Dolores Montero, Andalusian singer and dancer, with her folklore company. Within walking distance of the city, when passing through a wooded area, three individuals, gun in hand, seize the car and the luggage of the artists. Luckily, Miguel, owner of the Castillejo farm, invites her to his home. Over time, Dolores discovers that the robbery has been the revenge of a bullfighter stripped by the rebuffs she made in Spain. And at the same time, he begins to feel an attraction for Miguel, who admires him for his manhood and his nobility.

[Thanks to Biltmore for finding and submitting this film for inclusion.]
Posted by Tom B. at 5:50 AM