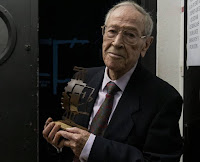 RIP Claudio Rodriguez. The voice and dubbing actor Claudio Rodriguez who was the voice of actors like Burt Lancaster, John Wayne and Anthony Quinn, has passed away December 4, 2019 at age 86, it was confirmed by Adoma, the association of dubbing artists in Madrid. Born in the Zamora town of La Bóveda de Toro in 1933, Rodríguez gave his voice in Spanish to well-known characters such as Albus Dumbledore, from the Harry Potter movie saga or to the Willy Fog of the eighties cartoon series “The Return of the World of Willy Fog.  The actor also read the text of characters played by Max von Sydow and Charlton Heston, who once told Rodriguez that he was known in Spain thanks to him. The doubler, who also worked as a dialogue adapter and dubbing director, gave voice to other iconic characters such as the Dracula of the Francis Ford Coppola film version. He was the voice of Lee Van Cleef, Robert Hundar, Rod Cameron, Fernando Casanova, Cameron Mitchell and Luis Induni to name just a few.
Posted by Tom B. at 1:58 PM