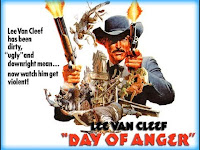 We start a new search for the filming locations for “Day of Anger”. The film opens with a shot of the western town of Clifton. We see a young man, Scott Mary, pulling a cart with with two barrels which contain human waste which he collects on a daily basis from the different homes and businesses that line the main street. He stops to speak with Blind Bill whose throwing beans into a pile of empty beer bottles. Bill is chased away by the saloon owner Mr. Murray. We are introduced to Sheriff Nigel, the town doctor, Mr. Miller who have little use for Scott.

The town of Clifton was filmed on the western set at Rome’s Cinecittà Studio, which had a livery stable, saloon, town houses and sheriff’s office. Director Tonino Valerii added a few grand looking homes, picket fences, the ‘Gila Saloon’ and the ‘Colt .45’ Saloon frontages to expand the set. Other buildings used in the filming at Cinecittà Studio were interior sets, saloons, the courthouse and a bank.

For a more detailed view of this site and other Spaghetti Western locations please visit my friend Yoshi Yasuda’s location site: http://y-yasuda.net/film-location.htm and Captain Douglas Film Locations http://www.western-locations-spain.com/
Posted by Tom B. at 7:34 AM