We continue our search for filming locations for “Day of Anger”. The scene switches to the interior of the stable where we see an older man grooming a horse. Scott enters with Talby’s horse and calls the man Murph and tells him to take good care of the horse he just brought in. Murph asks Scott what he’ll do with the dollar he’ll earn and Scott tells him he’ll save it as he already has eight dollars and with another ten he can by a Colt and the emporium. The discussion turns to how important a good gun is and how to use it, like Doc Holliday. Murph’s ears perk up when he hears the name Talby and says he’s heard the name before but not in Clifton. 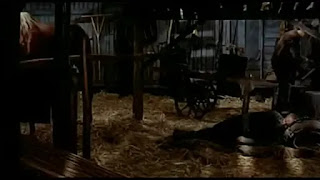 The scene was filmed in the stable at the Cinecittà Studio western set in Rome, Italy. 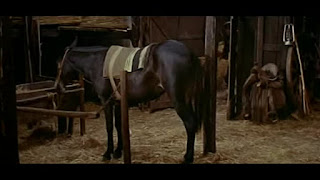 For a more detailed view of this site and other Spaghetti Western locations please visit my friend Yoshi Yasuda’s location site: http://y-yasuda.net/film-location.htm and Captain Douglas Film Locations http://www.western-locations-spain.com/
Posted by Tom B. at 7:02 AM