Who Are Those Gals? ~ Susan Campos 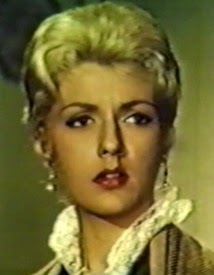 Susana Campos Ovalle was born on August 3, 1934 in Buenos Aires, Argentina. From a very young age she showed a talent for acting. She had her first opportunity, by some accounts in “Tres millones... y el amor” directed by Luis Bayon Herrera in 1946. Other researchers state that her career began in 1947 when she was selected along with other girls, including Analia Gade, in a contest to accompany Maria Duval in “La serpiente de cascabel” (Rattlesnake), directed by Carlos Schlieper and others place the young Actress in a previous film, “Mi novia es un fantasma” directed by Mugica Francisco.

Susana received other roles and travelled to Spain, where she shot several films. The actress used to appear in these films with dyed blonde hair, which director José Luis Borau did not like, he admired her clean and serene beauty as much as for her talent. He chose her to star in “Crimen de doble” (1964) and managed to convince her to change her hair to its natural color. Other memorable performances were in “Del brazo y por la calle” (1966), “Los muchachos de antes no usaban gomina” (1969), “El día que me quieras” (1969), with Hugo del Carril, “Los chicos crecen” (1974) and “Los viernes de la eternidad” (1980). Susana appeared in only one Euro-western under the pseudonym Evelin Therens, “Django Does Not Forgive” (1966) in the role of Helen Patterson.

Campos also appeared on stage in such plays as “Death of a Salesman” by Arthur Miller and “Guilty by Narciso Ibáñez Menta. Her stage and film career ran simultaneously until her death.

She was stricken by a brain tumor in 1999 which she had removed but it returned and she died on October 16, 2004 in her hometown of Buenos Aires, Argentina at the age of 70.