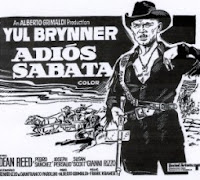 We begin our search for filming locations for the 1970 film “Adios Sabata”. The film opens at an orphanage run by a group of priests. One of the old priests bemoans that there is too much violence in the world and sends Juanito to tell their friend and benefactor Sabata not to get involved with taking vengeance on the Murdock brothers who have robbed the orphanage of all they have. He tells Juanito, “The Lord be with you”, and Juanito responds, “The Lord is Sabata!”.

This opening scene was filmed south of Mini Hollywood back in the foothills and requires quite a hike to reach what’s left of the buildings. It’s called Balsicas de Alfonso, Spain.